I've been holding off celebrating this past Monday when the electors across all 50 states met and made Joseph Biden officially the President-Elect about to be inaugurated on January 20th as the 47th President of the US, with Kamala Harris his Vice President. By Wednesday, it appeared that the ruthless lying Republicans who had been supporting Trump's attempted coup were beginning publicly to accept the truth, that a vast majority of Americans in an election in which more people voted than ever before voted in Biden, the congress prepared to assemble on January 5th and declare him President.  That situation still obtains and if I sound at all anxious it's lest my heart breaks yet -- because this truly evil man somehow holds on to power illegitimately.  Among others, another very bad man but still powerful, Mitch McConnell  congratulated Biden and held a meeting telling fellow Republican senators, it was time to move on, and they should accept as a body Biden as president. Of course not much later Trump was tweeting  insults at McConnell and declaring he won everywhere and there is new fraud discovered in Nevada ...

(It is said that McConnell made his move because the Republicans are being clobbered as early voting in Georgia for the two Senate seats begins: Georgians are sickening, dying, in bleak situations so many without food, jobs, and at risk of eviction. Thus a stimulus bill  is about to be signed giving ordinary people and small business desperately needed money to carry on.  But only a minimal amount, tiny in comparison to what is needed. 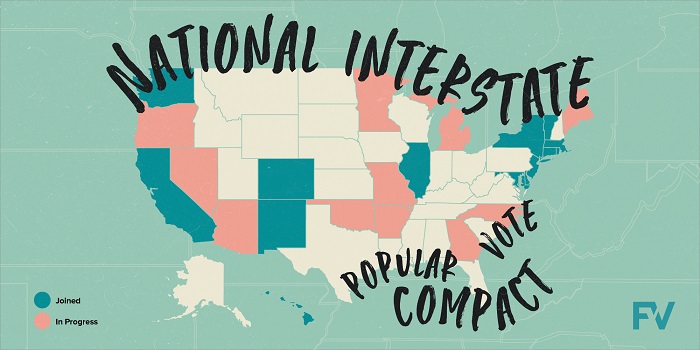 But this article and conversation on The Campaign for a National Popular Vote Interstate Compact is too important and I worry I won't find it again.  On DemocracyNow It's called the Campaign for a National Popular Vote Interstate Compact to elect presidents.  John Koza, Chair and the increasingly group is working to change the Electoral College so that it will not be winner takes all in each state, but all the votes at the end of each state election gathered together from each as a whole and then counted as a single group -- that would make the electoral reflect the popular vote.
You don't need a constitutional amendment. He maintains Congress could not stop the states if they all decided to do this as counting the votes (how they do it) is specifically left up to them. Indeed the how right now is quite different but each submits a winner takes all in that state tally. That is what would change.
That's why Trump could not force state officials to do what he wanted -- he has no power over the state elections. He can pressure, bribe, threaten individuals but he has no standing (he's learned to say the idea of "standing in court" is a technicality oh no it's not). This Professor said quite a number of states have signed onto this, either in one of their houses or both -- four small states — Delaware, Hawaii, Rhode Island and Vermont — and eight medium-size states — Colorado, where, by the way, the voters just reaffirmed the action of the Colorado Legislature and governor and approved National Popular Vote — Colorado, Connecticut, Maryland, Massachusetts, New Jersey, New Mexico, Oregon and Washington — and then three bigger states — California, Illinois and New York.

They need states with 74 more electoral votes to put this into effect, hopefully in time for the 2024 presidential elections. And in terms of progress in that direction, there are nine additional states, with 88 electoral votes, where at least one house of the legislature has already passed the National Popular Vote bill. So we’re optimistic that we can succeed in putting this into effect in time for the 2024 election.

They are optimistic about Virginia. The bill also passed one house in Maine in 2019. And in Michigan in 2018, 25 of the 38 state senators sponsored the bill, including a majority of both parties. And then it passed the Minnesota House in 2019, and some other states.

The fault-line does not appear to be size nor necessarily party. This would counter gerrymandering too. The reason you get such extreme Congressman is outrageous egregious gerrymandering.
Of course Republicans and Southerners are against it -- but not all Republicans. For the way the election is done there are these battle ground states and all other states are ignored as in effect their electoral input is nullified. Now the ignored states don't like that one little bit. It nullifies their participation in an election. The frightening truth is Trump could have won -- be once a wrong-winner as this man put it -- had some 21,000 votes gone another way in the "key" states at the same time as Biden still have 7 million votes more.

Said Koza, 5 out of our presidents have lost the popular vote, and recently Bush in his first term and Trump in his. Koza calls them "wrong-winners."

Here is our hope for democracy -- there is a bunch of reforms in Congress now to stop fraud, including watch dogs, measures to prevent states throwing out votes - - but what we want is an electoral college that reflects the popular majority across the US so each state has to be fought for and there is no battle ground and no state that doesn't count because since it's winner take all will seem to be either democrat or republican before the campaigns even start.

Also the cleverness and insight of the PBS reports where they interviewed some people who emigated to the US some time ago to escape a dictator and find that Trump's behavior after this election resembled that of the dictators in the countries the people fled. So PBS and its team are not themselves saying Trump's behavior is that of a dictator but ordinary people who have experienced dictatorships outside the US do. The story is Yamiche Alcindor's and it's labeled immigrants hear echoes from [their dictatorship] past in Trump

No one ever loses elections in Haiti. And if they — you tell them they lose, they arm their gangs. They go around shooting everybody, burn down homes, burn down offices, burn down electoral offices, so that they can intimidate people, and, finally, they're self-declared winners.

What happens is that, when you have people really buying into the news that the — President Trump won, even though he didn't win the election, and he has all these people out there mobilizing for him, and these people are armed, they're threatening people, sooner or later, they can go out there and start violence. And then, eventually, people will be afraid
The American public doesn't understand that democracy is a fragile system that can wither away if you don't take care of it.

Now for the celebratory story:

It was later on Tuesday the New Yorker rejoiced  with  the second of the three articles I want to call attention to in this blog:  a fun article telling readers that the Bidens have acquired exquisitely adorable First Cat. He is clearly not a kitten. A kitten would not make it in such a sophisticated place. In said article, he outlines his strategy: When Proud Boys and such-like Trumptrash ilk go low, he'll go lower: right under a nearby bed. He is moving in January 20, 2020. I feel confident he will the sniff out any remaining rats. 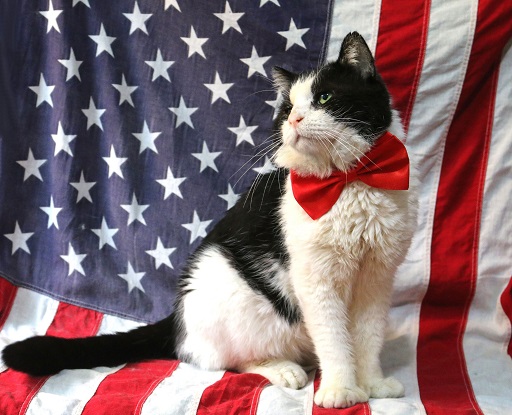 Finally I recommend reading Heather Cox Richardson's Letter from an American for December 16, 2020. Information that explains why the US in such a bad position today, why so many sickening and dying. You will learn that the Trump administration did deliberately try to infect as many young people as possible -- did everything they could while trying to disguise this. That's why Trump was demanding schools and colleges open up. It  is now confirmed that young people die and are maimed in great numbers too. This encouraged all sorts of people to refuse to wear masks, social distance, close their economy -- lose money. A terrific backlash has gone on against people running public health organizations has gone on and we are very weakened in all our institutions to help us to stay healthy.

Secondly, absolute indifference and incompetence has led to the biggest most profound hacking by the Russians into US cyberspace information.  It was the result of an incoherent policy. The way to stop such spy attacks is everyone in an administration works together to a coherent policy and we work with our allies. In the Trump years the exact opposite was done.

She then presents more signs some significant now powerful Republicans are turning away from Trumpism (which includes encouraging people to do things which make them sicken and die, refuse to send any kind of help to average people or businesses.  And of course trickle down theory is nonsense. If you give rich people and corporations more money it does not trickle down at all.  But these kinds of ideas are getting play in the media which they have not for a long time .... since say the Clinton and Carter years.

Just now millions of doses of vaccines are bought but (as usual) the Trump administration has no plan (he is too lazy and against anything that does not bring him money or power) to distribute them among the states so it will take much longer than it should -- which is not something easily done quickly anyway.
Miss Sylvia Drake
Tags: democracy, electoral college solution; campaign for, human abuse, pandemic, presidential campaign, trump extremely bad man, trump menacing clown, us social behavior
Subscribe