The coup is not over. Most of the mobsters (heavily armed) have not been arrested. Most of all, the instigator (Trump) has not gone and is not showing an iota of regret. Mulvaney resigned this morning. Trump must be impeached & convicted, or 25th out. He is feral. 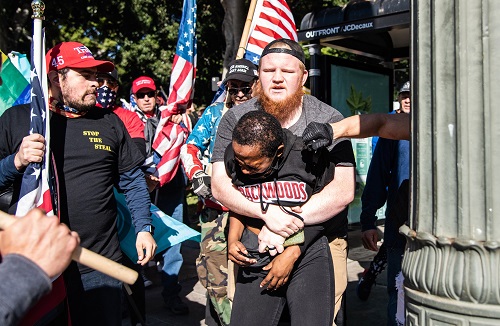 Black pedestrian attacked by Trumpster mob, this one in LA

The really bad news is this was a much wider conspiracy for Wednesday than was thought; it has the support of Republican Attorney Generals and State lawmakers (plus one of the Supreme Court Justices, Clarence Thomas) -- as well as what we know that it was very hard to get the National Guard in to do a job of protecting the Members of Congress (and reporters too). The good news is the gov't is holding firm, enough individuals in positions of power and authority don't want a dictatorship, especially by Trump -- but the atmosphere and what is happening is still worrying.
Meanwhile Trump continues to lie that he won the election, carries on to try to foment another insurrection. There is not enough time to do an impeachment, McConnell is still Majority leader of the senate and Republicans do not want to split the party over impeachment and conviction. Without these Trump gets a huge pension, money for travel, military protection and other perks he could use as a base to start a civil war. Richardson has lots of details put concisely. Trump has been removed from central social media; he howls but he could call the press ....
Here is Heather Cox Richardson's Newsletter for January 8, 2020 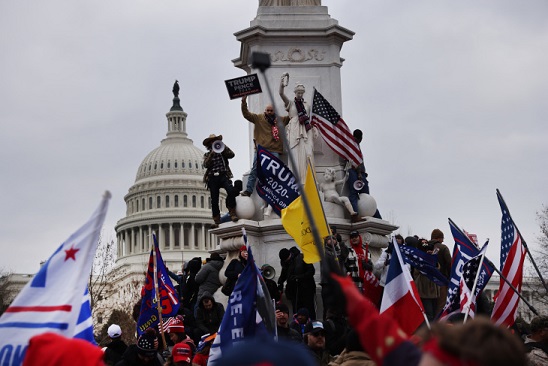 It's not all over. Although Trump's twitter account has at long last been suspended, it's only for 12 hours. Last night at midnight he was tweeting these same unhinged crazy tweets, he's won, by a landslide, these are loving beautiful people and not for a second did he concede anything. It was not he who ordered the police in, but Pence and Pelosi and McConnell and the two minority leaders; then the governors of Virginia and Maryland. These mobs were not arrested -- they were celebrating at midnight in the streets after a curfew had been called. They are all, so to speak (except maybe a couple of leaders) still at large. There is nothing from Trump to suggest he is going to stop this. And these are not an isolated band of very stupid crazed people; they were supported by speeches earlier, among them Trump and Guiliani, and there were assault and mob scenes across the US state houses 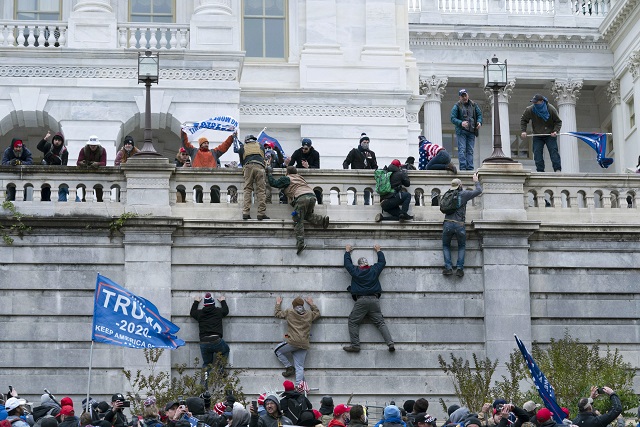 He is (like Bonnie Prince Charley) hoping to see the whole country rise - or enough ordinary people. They did not yesterday or last night. But 13 days is a long time. To go back to my original worry weeks ago now (months): I worried Trump would refuse to leave the white house and asked who would take him out? I offer the idea he is still determined not to leave office.
As of noon on January 20th Trump is no longer president and Biden is -- but Biden is not charge of these mobs. They attacked state houses across the country. They are armed fiercely. Yes Biden will then be able to order in the military and they can stop this -- but will the inauguration be permitted. 13 days is a long time. This was a concerted effort. Two nights ago Trump was out there inciting these people. Just before they crashed the building, Guiliana was out there inciting them (let's have trial by combat).
Congress must get rid of Trump. The Republicans are not convinced he is truly a liability. They went back to the congress and over 100 people carried on objecting and voted against this last declaration -- I saw some woman in black with a black mask on her face reiterating the same lies -- she did not say Trump won (nor did Cruz -- Cruz said this huge number of people believe he won and should we not respect their ideas? ). This after this attack on the Capitol Building. I understand McConnell cut short the debate. 13 days is a long time.
2/3s is needed to impeach and then remove. Heather Cox Richardson last night said it is more difficult to use the 25th amendment because you need the heads of cabinets. I add to this the heads of cabinets are by this point acting or lackeys corrupt. Impeachment is not that hard; maybe conviction. And then Pence must have him arrested.
Where was the FBI yesterday? There was violence all over the US.
Here is Cox Richardson's Letter from last night around midnight: She was actually calm last night as she video-chatted. Michael Moore during the day live-chatting was very shaken.