It is now clear yesterday was long in planning. A bandstand was built; Giuliani and Trump spoke to the mob first, both openly (Guiliani) and by indirection (Trump still wily) urging the mob to attack the building and people inside. To get people there took considerable planning. It's also clear that quite deliberately National Guard was withheld, and when the police came in, they were as gentle as they could be.
My question: what did Trump hope for? did he hope that a huge number of people in the USA would rejoice, come out for what was happening and thus allowed him to order the military to take over the gov't and he then could make himself dictator and hollow out the congress the way he has all the agencies under his control?
He must have hoped for some reinforcement and to take over, no? Did he not realize he needed to plan and organize more? put the groups attacking the statehouses closer in contact? Was this another botch, another instance of his laziness and incompetence?
Or was this a stunt he knew would not produce a country wide coordinated coup -- so what was in yesterday for him? He carried on tweeting deranged lies, made a video to incite more violence -- it was at that video that Twitter finally cut him but it's still said for only 12 hours (is he back?) and indefinitely from Facebook & Instagram.
The line conceding the presidency strikes me as written by someone else. So too did Amy Goodman clearly believe it was written by someone else. It lacks his usual withering anger tone of passion and arrogance.
Never has he said one word of belief in Biden's win -- even now.
What was or is the point? What did he hope to gain? Do you have any theories? It was a real coup attempt. 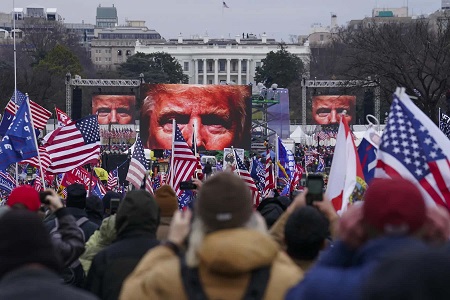 A small photo of the bandstand early on December 6th, the crowd waiting for Trump & Co to arrive