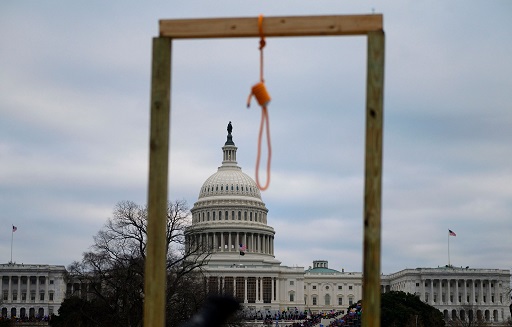 Built quickly a scaffold this January 6th -- by the mobs of people, ready to execute (it's said) Pence
for disloyalty to Trump and anyone else in congress they disapproved of

The familiarity of this simple but agonizing death machine (often accompanied by desecration of the corpse left hanging there) is suggestive of the long history behind the insurrection that was planned executed by various groups of people, including police, congress people, donors to white supremacist groups, and then incited, egged on by Trump. A successful impeachment was carried out last night in the House with still 197 Republicans refusing to impeach. This is also a refusal to condemn what happened - the white insurrectionists or mob. there is a long history of allowing white mobs to do what they want, including form private militias. There is a long history of appeasement of confederacy types starting shortly after the civil war. I don't say I think what officers were doing their jobs should have charged and massacred the white mob as they would have any Black protest but when you break the law, try to overturn a gov't and the refuse to admit you did anything wrong, far from it, threaten to do it again (from Jan 17-20), you should be arrested and punished by law.

On DemocracyNow.org for two nights in a row Amy Goodman and Juan Gonzalez have had historians talking about deep past and why this was expected: Tom Synder whose best known book seems to be On Tyranny: Ten Lessons of the Twentieth Century and the night before  Equally important and boding ill is Waldo Bello's experience in recent history that just the sort of violent mob attacks are the way a fascist minority typically has taken over democracies in the twentieth century.

And, you know, things that came back, came to my mind, were, for instance, the right-wing gangs in Chile that created the chaos that resulted in the military intervention that ousted President Allende back in 1973. And, you know, we had these groups like Patria y Libertad that pretty much were like this, the Proud Boys in the United States and the other right-wing gangsters.

Another image that flashed into my mind was the fascist squadristi of Mussolini, you know, that took power first by taking over the streets. And because the socialists in Italy at that time were becoming quite popular at the ballot box, the ruling class fought back mainly by promoting the fascist squads in their very violent ways of repressing the left.

I have something of my own I want to add tonight.

From reading Jill Lepore's history of the colonial period of the US and now Heather Cox Richardson's own book, on how the South won the Civil war, and other essays and books (Howard Zinn's History of the People of the US is as important as ever), I want to call attention to at least 300 years (starting 17th century) of violence between different ethnic, racial, cultural groups continuously across the US. Not all countries are "born" or invented this way. The US has been -- it was born from aggressive settler colonialist practices. Sometimes the violence and taking of land and property from the powerless and them taking it back or getting back violently -- the elite whites with their weapons most ragingly until the revolution was over -- and sometimes having decades of consolidation, a compromised peace where the elite and powerful whites get on with making money and garnering productive property (real estate, manufacturing, industrial agricultre. Again and again the resort to war to make the country larger, to take back more land, beginning pretty quickly with the war of 1812 (which was US versus Canada, the settlers then trying to expand also into Mexico), with enslavement and lynching central tools of the powerful white European elite and their coopted groups.

This result in a massive crisis when one part of this ruling group wanted to end enslavement so as to make a modern country and get jobs for the whites and make more prosperity by freedom for all for movement and work. For all means the huge number of enslaved people. To do this we had a civil war killing 600,000 (but now we've now had 300,000 allowed to die over this year), which did not finally end the conflict for the whites down south, the elites did not accept what would have been the results of the civil war, an assimilation of non-whites into the US population and powerful institutions too. The winners did not punish the losers but let them back into positions of power all over again.

Then decades of violent suppression lynching of blacks and minorities, very poor education for them, giving them the most menial jobs, ending finally in WW2 -- a genuine on-again off-again period from the 1950s where assimilation again tried, with more success until an attempt by law for powerful whites to share power (1965), which did happen until another solution emerged: put Black people with leftists into jail by huge numbers and then disenfranchise. Meanwhile (from 1970s) start stealthy but ceaseless campaign to foster rightist groups (1987 end of Fairness Doctrine in news) and spread of guns -- these militarist groups have been fostered by the US right, helped by a reinterpretation of the 2nd amendment. There was no right to carry a gun, there was a provision for civilian militias within states.

These groups were aligned with the Republican party -- their evangelicalism and the wealthy who want to pay no taxes insofar as they can -- by the use of open racist propaganda. The refusal of the elites to stop globalization has led to huge numbers of whites across the US are also impoverished and encouraged to blame the Blacks for taking "their" world of good manufacturing jobs away from them, with the democrats framed as their accomplices (of course they have mistaken the college elite from the elite in both parties who have destroyed their economic lives.)
Another aspect is while the Enlightenment was part of the US founding so were these fanatic religious groups -- to give people communities to belong to fiercely. Multi-culturalism has only gotten to the democratic part of the US -- there are a lot of people, 39% who vote consistently liberal democratic who are for a multi-cultural mulit-ethnic, secular tolerant modern society but they are fiercely opposed by this 20% who want a closed society, intolerant, one ethnicity, one race gets to vote -- so it is two visions of life.
So racism has to be seen in this larger context of an imperial unameliorated capitalist class-ridden country an outgrowth of settler colonialism -- violence just below (or not even) the surface. "Save the America march" means save White Christian America

I might as well include Heather Cox Richardson's most recent newsletter: https://tinyurl.com/y4ugvr6z