A new turn -- Biden returns the US Gov't to working for its people & to the truth; winter pictures

With the continual destruction of the US gov't insofar as Trump and his junta could achieve, and now these last weeks an attempt first to overturn a fair and free election, and that failing, overthrow the US gov't, for the four years over, and the worst impulses and ideas in the US body politic no longer encouraged (but rather discouraged), and a long hard road of re-building and improving our society for for all, I feel I no longer need to try to find the best political articles this week, or myself argue strongly against what's happening or who''s being hurt -- because for four years fascism was both a direct threat and being enacted. As many other forces and groups of people carry on doing evil, I won't give up using this as a political platform altogether, but right now think I've nothing to add uniquely worthy or knowledgeable when it comes to a now complicated -- democratic oligarchical -- political administration in the US which we return to once again, for my part with relief, though not happy at the Republican anti-democratic and fascist and other reactionary right groups still at work.

Biden is president, Harris vice-president, I celebrated their election the day he won -- with Morning has broken.  See November 9th, where I rejoiced that Biden and Harris had won, and had been declared winners by the TV and written presses with a rendition of Morning has Broken by Cat Stevens.  The election was seriously threatened, but  it now seems that has passed. I wrote an autobiographical entry on Sylvia II of my and Izzy's experience of Biden and Harris's Inaugural day, which ended with a spectacular display of fireworks: 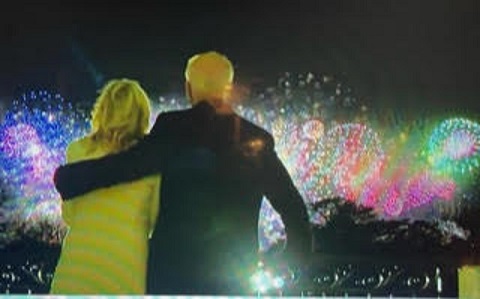 So a new turn is needed. This blog is an old one -- it goes back to before the year 2000. I opened a blog in LiveJournal because both my daughters blogged here; this was well before blogs became an omnipresent, and when wordpress and other sites opened, my daughters both left. I stayed on and Jim, my husband, opened another blog for he and I to write about culture, politics, ourselves. I began to use this to work out ideas for a book (on the Austen movies) and other projects. When the blog Jim and I had opened was attacked, and he took it down, salvaging what he could to put into my new wordpress blogs (three), this blog began to go in desuetude.

Then as Obama was running for president, I felt moved to make this into a political blog and thus it's been for some 12 years now. On my three blogs I write about culture in general (popular and otherwise, on the Net and elsewhere), or women's art, the 18th century and Jane Austen topics, or autobiographically. I make daily entries on facebook nowadays and I tweet that way too (more briefly).

So what's left? I have been concentrating on sending articles and essays that people might overlook about worrying developments in the four years Trump did all he could to turn the US back to a 1920s govt with him as a lawless tyrant making money, playing at looking powerful where he can or think he has to (while doing nothing) and in short making a sinister spectacle of himself

What I will do for now is help distribute Heather Cox Richardsons' newslettters most days -- with occasionally essays from Naked Capitalism; the London Review of Books, New Yorker, less so but New York Review of Books, TLS, and the Nation, Intercept, DemocracyNow.or, PBS reports. I'll also send items from a circle of blogs who daily send very good essays on important topics that the current US administrations and people are working on and care about.

So here is HCR last night around midnight:

Biden taking steps to replace all Trump sycophants with people who are experts in the  fields of agencies  whose leading position he appoints them to; he is also returning to the idea that a govt is supposed to serve the people of the state who want good services, a social safety net, regulations to make sure they and our environment are not destroyed by people who run companies ruthlessly for profit today: the consensus that arose from the New Deal, the Eisenhower Years, and LBJ's legislation.  It was people loyal to law, the state, the expertise of their fields who refused to allow Trump to take over and turn our government into a one man totalitarian fascist site operating at his whim.
And as my contribution for the days I do this kind of posting or blogging:  I do love pictures and as the days pass I often see lovely one, which I copy and save  to my files. Or occasionally beautiful music or movies and plays (or clips of these) on YouTube So now I think what I'll do is share these here too -- for now. I'd send poetry but it is so difficult to control the kind of lettering that appears here, and to relicate stanzas correctly is often hopeless.

Tonight I begin with an artist who paints beautiful watercolors.  I have two images of theseby Roland Hilder (1905-93) -- here is a wikipedia article where you can learn about him and some further sources to explore. 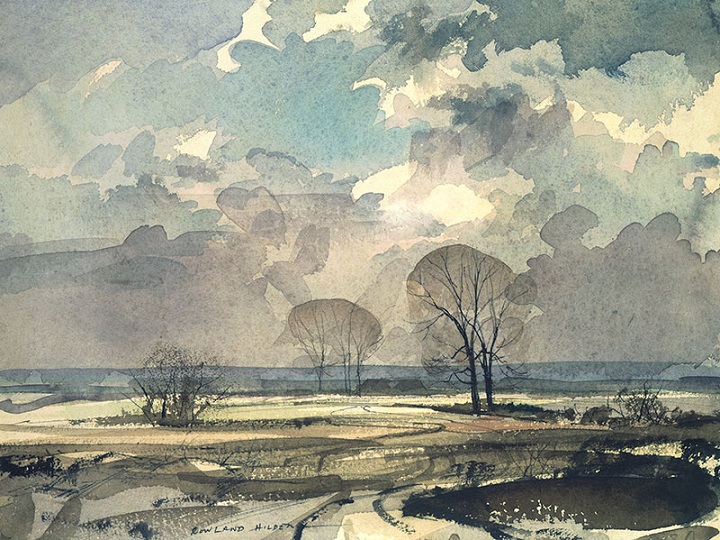 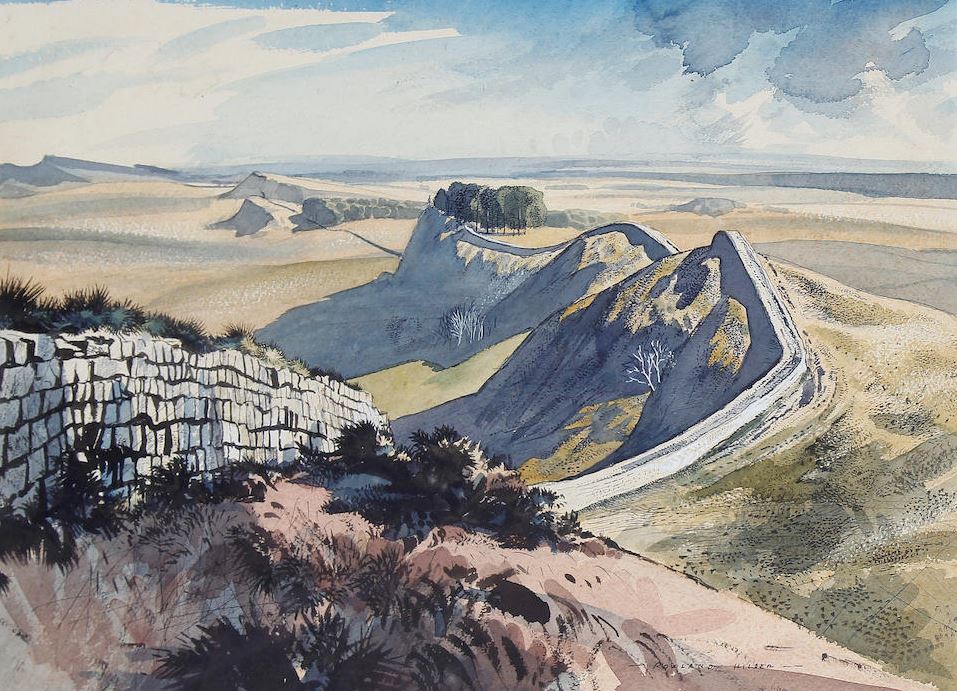 Hadrians Wall  -- where I did stand in August 2018 on a trip organized by and in  the company of other Road Scholars.