2nd Impeachment: a dangerous man who has committed criminal acts is acquitted

Dear friends and the few readers of this blog,

To me the bad outcome of the trial is Trump got plenty of money for the rest of his life and the ability to run again. Had he been convicted his career in anything legal would be over.  I take him to be  a
criminal: His last acts in the WH -- for some 4 weeks were undisguised criminalities -- taking outright bribes for pardons (many for criminals or people who did some favor for him, or who he thought could
do some favor for him), raking in money from supporters and putting that in his pockets, and then helping to engineer this attack.  I include the photo of someone who gouged out the eye of another person (a police officer), the FBI number to call if you recognize him, and report him to the police.  This man was one of those Trump unleashed on the public 1/6/2021 and would not call any military to stop it. 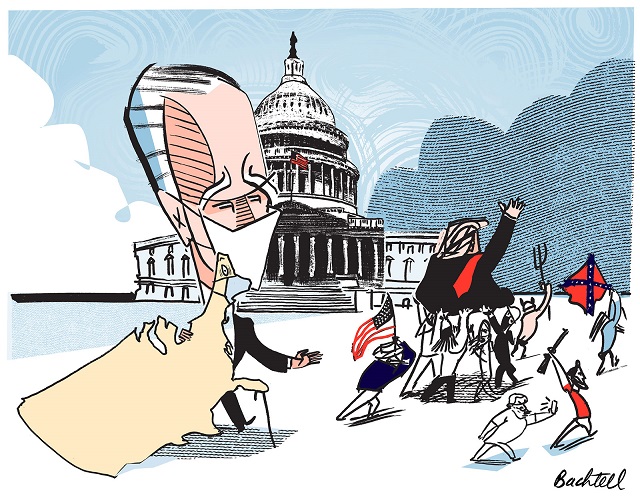 In this blog I am trying to further disseminate Ralph Nader's conversation with Amy Goodman.

In this conversation with Amy Goodman, Nader  said:

The purpose of this impeachment effort is prophylactic. It is designed not just to hold Trump accountable under the Constitution, but to prevent future wannabe Trumps from behaving in the same way. Therefore the only really result of a guilty verdict would be disqualifying Trump from running for federal office anymore.


While as usual, Heather Cox Richardson told us in her newsletter what we want and need to know about what happened yesterday (I did not know Trump's lawyers had the temerity to repeat his lies about the election and thus lie themselves, nor that they defended previous violent white supremacist riots approved by Trump where people died (Charlottesvillee); to be candid, she lacked the rigorous critique of what has happened over the past few days that Ralph Nader made last night on DemocracyNow.org

Nader predicted the acquittal not on the grounds the GOP could not have been convinced, but on the grounds as in the first trial, Pelosi refused to accuse him fully of all he had done and thus prevented the Democrats and American people from seeing the true case why he should have been removed from office before the pandemic, and why he should not ever be let to run for a office of public trust again. Now he is let loose with $90,000 a year for the rest of hife life, a million dollar travel fund and money for body guards.

A grave act happened today which could lead easily down the road to more riots, more violence, more killing and in the case of elections, no more peaceful acceptance of the democratic majority winner.

Listen to how Nader put it:

She was running the show. And she has two approaches, which she used in the first impeachment. One is she likes to rush the trial. The second is the reason why she likes to rush the trial without witnesses and subpoenas is that she has prejudged the result. She basically says these Republicans are intransigent, they’ll never change their mind, our duty is to impeach in the House and send it over to the Senate. Now that is a prescription for defeat, period. And as a result, the narrow approach of the articles of impeachment keep the Democrats from having a full hand. They have like ten arrows in their quiver and they are using one or two.

Now, what they should do is call witnesses. The witnesses they should call are not surprising: Donald Trump, Mike Pence, Georgia Secretary of State Brad Raffensperger, Acting Attorney General Jeffrey Rosen, some of the families of the victims, Garrett Miller or others who said they went down to the Congress on orders of their commander-in-chief who spoke to them and John Bolton who said that obstruction of justice was a way of life in the White House. He is the national security advisor before he resigned.

Otherwise, what the Republicans will do is simply say, “This is a video show trial. A lot of the material was taken out of context. And the protagonists were entirely Democratic partisans, members of the House Democratic Party.” If you have witnesses, you have the potential of breakthrough testimony."

Nader felt that her behavior both times was defeatist -- it reminds me of how Obama refused even to consider a single payer system, followed the Republican prescriptions for a controlled capitalist medical world, and what the gov't would do was help people to pay. So it is easy to destroy: you merely defund it. You get rid of the controls. There is no system, and everything is super-expensive, with unexpected terrifying bills. That is part of the reason Americans have died in such huge numbers. Here he is speaking again?

"Mike Pence, for example. Jay Rosen, for example. Brad Raffensperger. They might be required to testify about far deeper crimes than simply a telephone call to the Justice Department by Trump or to the Georgia Secretary of State twisting their elbows to try to change the course or the count of the election.

That is the unfortunate aspect of it, Amy, that they had an opportunity. Because here you have a president who has seized congressional power day after day in four years. He spent money without authorization. He has violated congressional mandates in health, safety and economic regulations. He has defied over 130 subpoenas and dozens of formal demands by congressional committees to testify in terms of his subordinates, cabinet and sub-cabinet levels.

So there are two layers here. His street crime attack on the Congress, that was well argued by the House Democrats. But then there’s the institutional separation of powers attack that was far more fundamental in terms of its long-range impact, in terms of its current impact on hundreds of millions of the American people. That was not part of the Articles of Impeachment. They didn’t go with the full hand. And had they gone with the full hand, they could have shown the intransigent Republicans exactly what price they’re going to pay if they vote to acquit Donald Trump.

Here is the kind of thing witnesses could have told us of. This man gouged out someone else's eye (a police officer); if you recognize him, tell the FBI so they can arrest him and put him where he cannot do such horrifying acts/damage to anyone else: 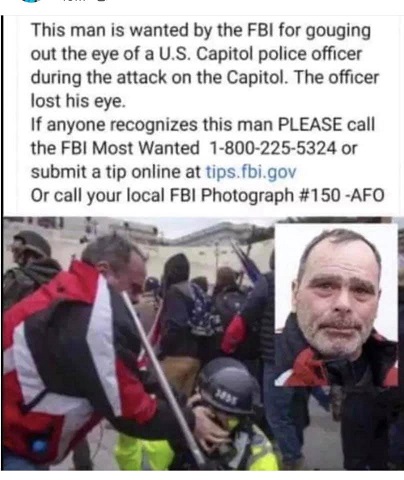 Kevin McCarthy is reported as phoning Trump and pleading with him to stop the violence as Trump had the levers of power to do it immediately; Trump replied that the crowd cared more about who was elected than McCarthy did. Actually there were curse words and McCarthy became livid as he felt the intoxicated anarchy in Trump's tone: "who the fuck do you think you are talking to?"

A bitter blow, I wanted to see Trump effectively defanged, and no longer a threat to all Americans. He still is that.
Ellen