What started this present slaughter/destruction of Palestinians: eviction from homes; mosque attack

I've not written for quite some time, and while (I'm relieved to say) what I'm going to present is being presented in parts of the mainstream media; nonetheless, it's not said clearly enough in enough places:   there are not two equal sides and two equal wrongs in this latest  renewal of harsh violence on the Palestinians (they are killed 10 to 1, civilians, women and children as well as armed me):  the Israelis began an immoral and utterly illegal evication from their homes in Jerusalem of groups of Palestinians (a repeat of what we've seen for decades in the west bank) on top of the worst attack on a mosque (Al Aqsa) in Jerusalem by Israelis in decades -- this coincides with a parade that the right-wing religious and national Israelis hold every year, this year timed with Ramadan.

The support for Israel as doing no wrong, having the right "to self-defense" - is ludicrous. It's the Palestinians who are being exterminated. Israel is the initiator most of the time -- kicking Palestinians off their land, embargoing Gaza, militarily terrorizing the people in both the West Bank & Gaza and then every once in a while slaughtering Palestinians.
This time the cause was Israel evicting lots of Palestinians from Jerusalem, and when right-wing fanatic Jews have this rabid parade through Jerusalem, the police found an excuse and attacked a central mosque. This is Trump's legacy; he said Jerusalem can now be the capital so the Israeli gov't with many of its people want to ethnically cleanse Jerusalem. And the supporters are far more than American Jews giving money. Israel voted in this horrific gov't. They behave to the Palestinians like the Nazis did to them short of openly exterminating them in camps.

I've a book in the house with a chapter where it's argued that archeaologically it has been shown that the stories in the Bible have no basis in the place claimed -- the very claim to this territory is not supported by the archeaological evidence. Anyway who can claim a territory 1000s of years later. US whites today do not take Native American claims seriously, nor do Canadians their Native Canadians. It's all trumped up nonsense -- Jews could have returned to Palestine and been part of the state but what they did was make war on the people there, and then ethnically cleanse the place by killing and destroying Palestinians and two wars were successful 1948 and 1967 and Israel has behaved horrifically to the Palestinians ever after.

I'm now preparing a Foremother Poet blog featuring Dahlia Ravikovitch, a native born Israel Jew who was (in effect) pro-Palestinian as she wanted Palestinians to have the same rights as Jews -- she inveighed eloquently and deeply heart-felt all that is done to the Palestinians in Israel. 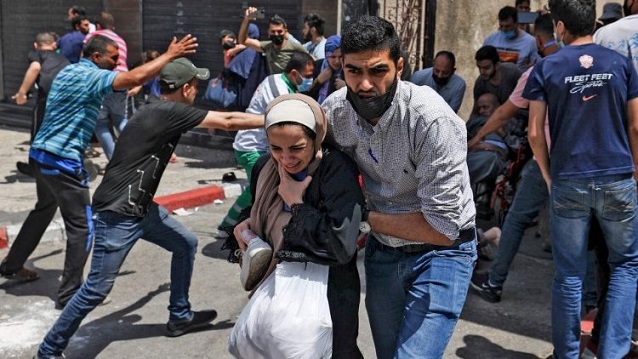 I was heartened two nights ago to find that on PBS, a segment with John Yang as interviewer made just the above points before going on to treat the situation more neutrally because since Israel has the enormous and is prepared to use it, you must take into consideration their justifications and their obvious real aims.  They are also going to use the situation  (as Hamas and the Arabs naturally fling back these rockets which do little damage in comparison with how they are used as a propaganda against the Palestinians) to again inflict death, pain, destruction on Gaza, which is still under an embargo and is an open air prison.  The shamelessness of the Israelis for not sharing their huge supply of vaccines with these Palestinian people (except those who cross the border, check point into Israel proper0 tells you what the Israeli gov't wishes would happen to them. 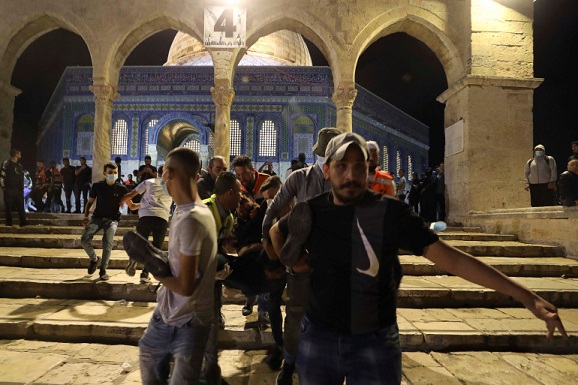 Then, as Youssef Unayyer writes in The Nation, it is essential to understand how we arrived at this moment:

To understand how we’ve arrived at this moment, it is essential to start with the story of Sheikh Jarrah. That small Jerusalem enclave, from which several Palestinian families have been under threat of expulsion, is perhaps, the most immediate proximate cause of this latest crisis. It is also just the latest targeted dispossession of Palestinians by Israel, which has been part of a more than 70–year process.

Since occupying the West Bank in 1967, the Israeli government has pursued various policies aimed at demographically engineering the city of Jerusalem—again, all with an eye toward ensuring its perpetual dominance over the city. Among such policies are the building of illegal settlements around the city to cut it off from the rest of the Palestinian population in the West Bank; the restriction of movement to deny Palestinians access to and within the municipality itself; the revocation of Palestinian residency status, which is tantamount to expulsion; and the demolition of Palestinian homes. The Israelis also expel Palestinians from their homes, as we are witnessing in Sheikh Jarrah, so that they can be handed to Israeli settlers.

I leave my reader to read on at the Nation.

In several day sequence, Amy Goodman in DemocracyNow has been dealing with this for days.   These are series of videos and transcripts:

"The scene is horrific:"  Gazans trapped as Israel escalates bombing,  killing dozens in the territory:

It is a historic uprising against Israel control from the river to the sea: 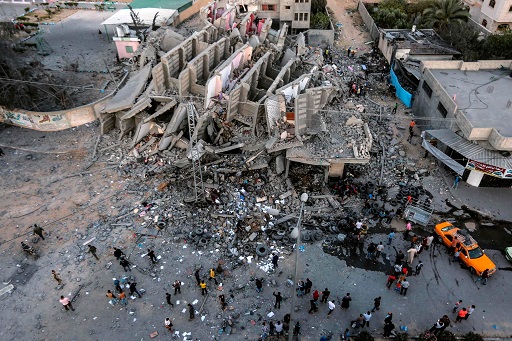 Gaza from above during a lull 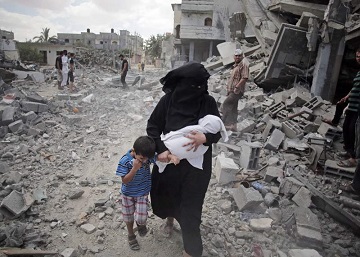 A woman and her children fleeing the scene today