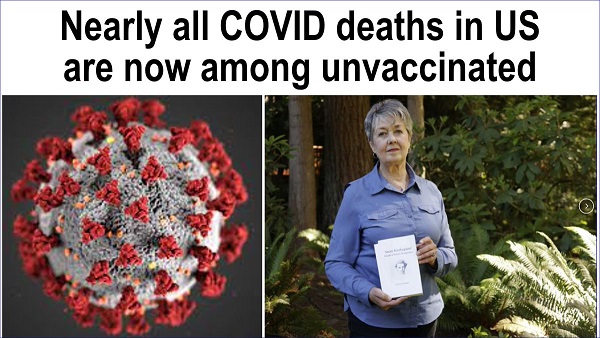 Now the unvaccinated are getting seriously ill and dying "like flies". What do you do with a population preferring to sicken and risk die, following leaders who apparently hope by doing so they can unseat the present POTUS (Biden), who with most of the elected members of his party (stopped by arcane senate arrangements meant to keep slavery in place) is doing everything he can to save people and improve their lives.
Beyond trying to create an unstable situation where (do they hope) crazed demonstrations will begin, this refusal to be vaccinated can encourage the development of more dangerous strains of COVID. I have not yet grown used to how the GOP wants people to die and does all it can to kill off people, including possible GOP voters. .
My tentative view: "the thinking" might be that if the virus were really totally gone in effect, Biden would be fully credited and democrats have such landslide in 2024 that all the cheating, gerrymandering, refusal to count votes, refusal to accept an election officially might not counteract the GOP loss unless they were to go the third country or dictatorship route: make no bones about throwing out thousands and thousands of votes. Therefore the GOP needs to keep the pandemic going: making people seriously ill and killing people. So for the GOP the less people vaccinated, the better. They are also refusing to distribute the unemployments checks for $300. Donw south and in the west they make vaccination access hard. In Mississippi four counties have no vaccination site: heavily Black, these people lack cars, free time, and rightly distrust state officials.
During the 1930s the US population did not refuse FDR's New Deal; they did not refuse Social Security. What is wrong with US education at the grade and high school level is a question that come to my mind.

Recent Posts from This Journal