Why we need infrastructure bills so badly ....

There's the small bi-partisan one, which represents a strong band-aid, and the democratic one which seeks to remedy the problem by re-building, re-casting, re-socializing and yes instituting codes and rules and laws to make for social progress once again.

As the newscasters on the channels I watch (PBS, DemocracyNow.org) and MSNBC say nothing like this for decades. The states don't have the money. GOP doesn't care. They want the average person to be poor and wretched so they'll work for nothing. Witness the refusal to up the minimum wage, the destruction of pensions, Trump's attempt to terminate social security, the politicizing of masks.   Governors in GOP forbidding mandating masks. Also building codes not renewed.  The wonders of unqualified capitalism is the US. If eviction moratorium allowed to lapse, we'll soon be like India in places. We are the third world in many places -- there's a word for it.  Right. That Florida building should not have collapsed so utterly, totally. The tenant-owners would not get together to spend the enormous sum needed -- because they'd have to pay for it and they are only retired middling people. Should not have been permitted to build there.  Nothing being done for climate change in Florida.  The inability of places deliberately set up to be communal spaces quickly not being able to provide parking because vulture-pirates ("venture capitalists") devour the space for profit.  Amazing we have any parks at all -- they are from the later 19th century and 1930s (a terrible time for Black people, when most of the hideous confederacy white supremacist statues went up).
American fascism. American fascism.  Yesterday the anniversary of the Charlotte, Virginia violent mob gangs. Richardson explains who they were, their excuse, the reality, what they did: killed one person with a car, injured 19 others. I have heard Biden say he decided to run for President firmly when he watched that scene. These mobs are at it again: they are violently acting against masking mandates for children and young adults in schools.

A story from someone on facebook (accompanied by a photo of a church being destroyed by a wrecking company):  My grandfather was Pres. of the Board of Trustees when this church was built, started the church in his living room. My dad was President when the new wing was built and spent hours there overseeing the work to make sure it was solid, once took a contractor by the collar and held him up against the wall when he found them having done no work for a week (but billing for it). And what we get for it is... a parking lot. The United Methodist Church. Don't get me started. 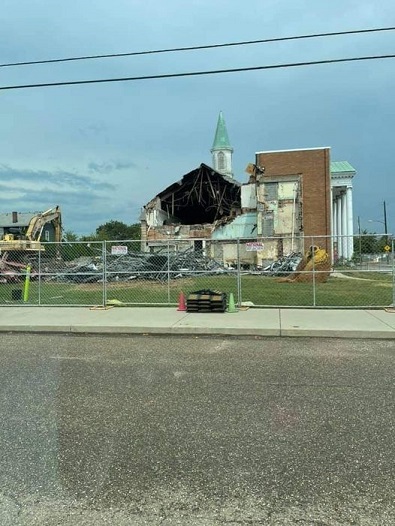 Personal experience: Yesterday I met with my old friend ex-student, Lloyd - he's in his early 50s now. I had trouble again, was in a fluster trying to get there, couldn't program the Waze, didn't bring the right paper for the map but half-way there he phones (I have my cell phone right there) and he's having trouble.  His car is not acting right (something to do with the radiator) so he's going back to change cars and can we meet an hour later.  He tells me in words where it is -- next to the place the restaurant we used to go to used to be (having gone bankrupt).  Whew! I go back, write out address, now don't need Waze (for I know where it is), now remember glasses, Lloyd's phone number in the cell phone, set forth again Now bad trouble parking  Great irony  Four blocks four ways set up to be a pedestrian area of movies, restaurants, the last few years has almost no public parking.  A huge car park bought up and huge building built there  The same thing happened where there is another movie house . Finally I find a small strip in the third level of a garage.  Real problem: I've not been out in so long navigating myself by car, very nervous.  But I get there and he's there.  Two hours of good conversation and renewal.  He majored in geography and has a good geology background; he still works for the Environmental Protection Agency.  It was turned into a farce with the Trump appointee filing the lobby with guns, and pictures of shot animals.  They are trying to re-staff, re-calibrate, start again with all the new executive orders countermanding most of Trump's  He by the way is in trouble for his old age:  he and his wife never managed to save anything much; they own two homes but are approaching retirement age. His mother taken care of by 1930s-40s programs; hers by a small (lucky) inheritance.  They never had children.  Cannot afford them. Recently their 16 year old cat died.  Way too expensive (huge) to provide needed insulin for cat became mildly diabetic.
Miss Sylvia Drake
Tags: biden speech, corrupt politicians, covid-19, gutting environment, health care systems, medicine, politics, private property, real family life, social life, us social behavior, violence
Subscribe