I feel for Julian Assange.  He is now seeking asylum in the Ecuadorian embassy in London. Who is after him? The US gov't. What is his crime: he published on the Net the real motives and real inner workings of people who run gov'ts and gov't agencies around the world. How they really inter-relate to one another; the actual continual exchanges of favors and bribes of all sorts that people engage in, why they have done what they did, how they think and feel. He did this through releasing onto the Net what they wrote in thousands of written digitalized communications. How I wish all gov'ts and places were open and exposed by such a procedure. In my case especially universities and colleges. His work crosses all issues.

He's a really bold guy. I first realized how the New York Review of Books is strongly complacent on the establishment and world as it works when it published articles attacking Assange. In fact many publications did. People feel personally threatened by this man.

But it's not the implicit fear he arouses that he will publish less than admirable information about you, or how you or your friends got a job, or made the money you did, or your sex, life, it's his exposure of those who run gov'ts and gov't agencies and institutions and corporations around the world that's done him in.

Of course if you threaten such people, it's not hard for them to find someone to produce evidence to blacken your reputation or even put your in jail.  That's the key to the abundance of blackmail stories.  Assange is accused of sexual molestation by two women in Sweden; he says the sex was consensual, and he would have returned to face the allegations (they are not charges), but that rightly he fears if he is extradited to Sweden, the US will immediately call on Sweden to extradite him to the US. It is the US gov't which has put pressure on the British gov't to extradite him to Sweden. Once brought to the US, he will be put in prison for life. He will be treated like Bradley Manning: harassed, abused (shamed and humiliated, emotionally tortured, probably beat up badly) and like thousands of US prisoners put in solitary confinement. His lawyer predicts he'll never see the light of day again. He might be executed for treason.

He is a remarkably courageous, a nervy man, really bold and has received a number of awards for his activities on behalf of freedom of the press. For that's what he stands for. Utter openness.

Among the many ways the presentation of Julian Assange is distorted in the media is he's not called a journalist first and foremost.  The story usually begins with how he was an "internet-hacker" when he was young. Who likes a hacker? We are not told that the hacking was in the same spirit as the WikiLeaks: he tried to wrest from computers information about the workings of universities (!), companies, local Australian and international ones.  He and his associates called themselves the International Subversives. He did during these years expose information to try genuinely to stop child abuse (not easy as the agencies set up to protect children often don't.)

He was among the earliest people on the Net to set up ISPs. Then he did work as a programmer and gave away free software. He also developed encryption systems intended to protect people who wanted to make sure their data wasn't hacked. If you know how to hack, well then you can probably figure out how to stop others from hacking you, or at least try.

We hear he's a "programmer,"  "political activist", an "internet-wizard," and only at the end of this string of professions, "journalist."  He is first of all a journalist, and he's a modern form of journalist, disseminating his stories and materials on the Net. Age 40, Australian. He was editor-in-chief and founder of WikiLeaks, an online site specializing in whistle-blower stories; its goal open transparent governments. 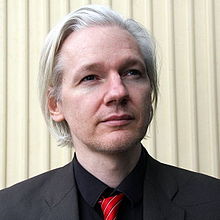 I feel for him. He's been successfully hounded. He is now dependent on the will of one man, the head of Ecuador, to protect him from utter silencing and a form of death-in-life. I'm not brave at all, I'm not aggressive. It does appear that he's not a nice person to live with; his marriage didn't last long. He has two children one by his wife and another a partner.

Henceforth the word super-hot will be reserved for temperatures 105F and above. 99F just doesn't make the cut. The word shall retain its power and pungency. A few years ago the standard could be 100F; no more. 100F is commonplace. I refuse to take into account the heat index.