I have very bad news, the worst. The admiral's cancer has metastasized into his liver. He could, might die in 7.8 months say the statistics. Some live as long as 18 months.  All 5 year stories are anecdotal. From what I've read it's probable no doctor can do much for him, but I met at the beginning of this ordeal (when he was diagnosed with esophageal cancer), in early May one Basima Antabili, a so-called oncologist. She is as appalling as Poonima U. Pandellapalli. You remember her. The one who after I told of four episodes of hemmorhaging with the same pattern had the face to tell me these were all coincidences, and I could go on with any procedure or surgery without fear. She would be there. When I wrote her clearly pointing out the lack of any sense in her responses (calculated not to spend time or money on me), she promised to do some tests and said she'd get in touch. Of course she never did. A liar.  She was afraid of those messages and so wrote that so she would be transparently seen to dismiss me. Here it is on December 23rd, 2000: a not atypical physician.

Be sure and keep her name in mind and spread the word about what a liar and poor doctor Poonima U. PandellaPalli is.

Basima Antabili is as bad.  She is interested in one thing: her place in the organization. she does not think it necessary to phone her patients even when they are in deep pain from cancer, experiencing deep nausea. Now that he has less likelihood of living (?) -- is that why? she will not do radiation. Oh no, not necessary. She has nothing to say in explanation since she has not seen the full C-Scan. She spends her time with tests, print-outs and other Kaiser doctors. That Dr Fortes was the man who did the drastic (and awful) operation is irrelevant. Why bother? what good would that do her career? and it might encourage them. She implied I am a nervous wreck -- I've had that from male doctors many a time -- and now this female. Her English is bad. Oh she'll see my husband in four weeks, and she'll email him a regimen he must follow. Can she get off the phone now? She was busy with patients all day said she. But when Dr Wiltz (our primary care man who did see us and ordered the medication he needed) phoned her, she picked up that phone.

No explanation why one does chemotherapy and what it is supposed to do for him. No explanation of anything. Why bother?  I looked it up the Net: it can cure, it can reduce the size of the cancer and thus may it less painful; it can prolong life. She does what is in her job description no more and is protected by the medical establishment. It says nowhere she needs to explain anything. I can't complain or let her know what I think of her yet as she would get back.

And I'm told before the people on the phone who make appointments can give me information they have to check with this doctor beforehand. So she's covered on all angles.

Be sure and keep her name in mind and spread the word about what a heartless bitch and poor doctor she is.

Oh she is a liar too.  When she called at 5:20 pm -- just before her official day ends so she could be in a hurry as of course when her day ends she cannot be expected to talk on -- when she called she pretended at one point to have called Fortes but when I asked what Fortes had said, she changed the subject. She will never phone him. It's not in her interest at all. (Chaudury said Antabili would not read her mail -- the message Chaudury had sent on Saturday -- until Monday when Antabili came back into the office. I asked "Does she never look at it?" instead of answering that she said well the mail is on the Kaiser site and maybe she is not attached to the Kaiser site at home."  Yes and the moon is made of green cheese. How probable is that? I surmize she may look but she has the excuse not to do anything or admit knowing anything until Monday after 9:00; by that time she may use the time to figure out what she will do to protect heself first, and do the least she can get away with -- as the safest course for her.)

There's really no use to see her of course. When we did and the Admiral kept saying he was miserable and described his symptoms, she looked at him and did listen to his heart but then dismissed him. He was doing "terrifically:" look here it says so on this sheet.  Irony of ironies: that's Dr Fortse's note to her when he couldn't get her to come to a phone. Of course Dr Fortes wants to believe that. When we saw Wiltz in March, the Admiral was there to tell of his swollen feet and just mentioned his trouble swallowing; Wiltz immediately picked up on that and sent him for a barium swallow and caught the esophageal cancer one month later (another wait alas) because we had to wait that long for a time for both endoscopy and colonoscopy. But when he looks at you, it has some use. None with her.

May both women be fired. I note that there is no place that I can find on the Kaiser site which gives their names. I am not good at finding this sort of thing out so if anyone wants to for me, pray do and send me the URL.

Tell these stories if US medicine should come up in conversation. Name the women, be sure and name them.

I have written on politics here -- and poetry too: here is where we are the 99% in other areas of life. 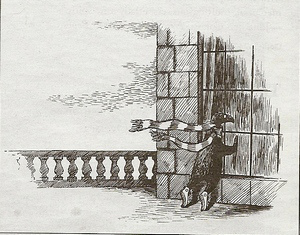 Here is some advice for those who can do this sort of thing how to try to change things. Disrupt the system: Zizek