I thought I'd nake a blog as it just took me a great deal of trouble to renew this account for the pictures. Thus I put my latest photo of my two cats on this site.  They are now my companions: 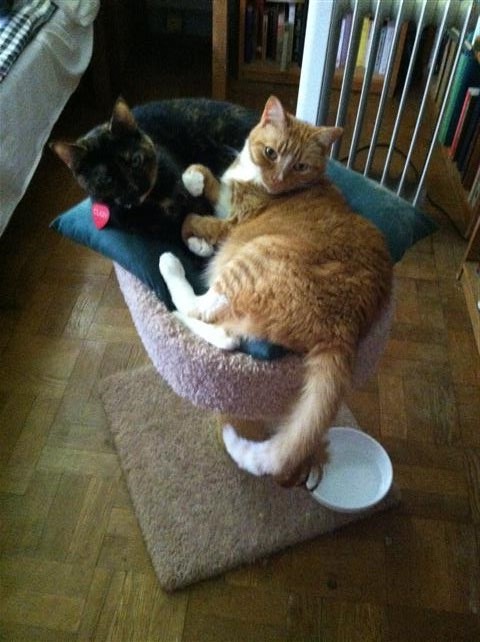 And here is a blog I wrote about them and Olivia Manning's Extraordinary Cats.

I am going to stop going to the grief support person I've been going to because I suspect she wants to get rid of me. We are not compatible for real and so she told me this crazy story about how when a butterfly lands near her it is a sign from a dead person of her friend. She was challenging me to say she is deluded. It is false to think these psychologists/psychiatrists operate from more benign controlled motives. Many are socially coercive strongly, most.  To be fair, I did talk with her telling of what last August was like, how it was a hell for me and my beloved. And now I'm here without him.

I am wondering if the piano teacher I hired wants me as a student. She took 2 weeks to start the lessons and now she's cancelled again. She says it's summer and she has a vacation to go on. I had practices this week but there's so little to go on for 2 more weeks I feel silly. If she cancels again, I'll try the JCCNV as I'm told they offer these and they are much less expensive. I am enjoying Dance Fusion Workshop: imagine a group of 50 to 60+ year old women dancing in exercise sort of mode before a mirror, following a lithe 30+ year old teacher in ways that are reminiscent of a Michael Jackson video. I didn't say very like ...

I am working on the projects I told you about (edition of Ethelinde for Valancourt; my book on Austen films, and now a review of a book called Better Left Unsaid: Victorian Novels, the Hays Code films and the Benefits of Censorship by Nora Gilbert, finished a couple; I sent off a review of Kenneth Johnston's Unusual Suspects, my review of Simon Heffer's High Minds is on the Victorian Web,and I sent off an introduction to Valancourt's edition of Eleanor Sleath's Orphan of the Rhine. I will start teaching at two OLLIs, one at AU (Anthony Trollope: Beyond Barsetshire) and one at GMU (The Gothic: ghost stories & films, Jackson's Haunting of Hill House, Martin's Mary Reilly, Charnas's Vampire Tapestry),  Reading with friends on the Net and keeping up my other blogs on wordpress once a week.

Life is desolate for me because without him I live an impoverished life -- I cannot do what I could with his aid and presence. Desperately lonely for his talk and attitudes. The epitaph I chose for this blog seems prophetic now. I did fear he might die much younger than the average, but did not foresee how he would be taken from me, so cruelly to him and so swiftly to me.