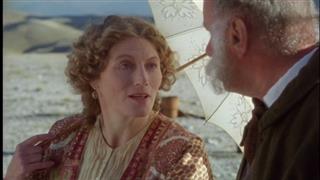 Geraldine James as Lady Rowley in He Knew He Was Right: Davies utterly transforms this character into a intelligent outspoken older woman; Gravatar for this Barbara Murray and Susan Hampshire as Mrs Finn and the Duchess of Omnium strolling in St James's Park (from Raven's The Pallisers, Prime Minister)

As I was turning from Trollope's 20 letters to the Liverpool Mercury and beginning John Caldigate this weekend, I asked myself, how many Trollope fictions have I read since August 2013:

I totted them up:

From round about the time Jim was lying in the back bedroom dying, while I was working in my workroom close by on a paper on Andrew Davies's two film adaptations of Trollope novels, August-September 2013

I'm now nearly done with John Caldigate (who as a character I do not like; my favorite character is Euphemia Smith Caldigate -- I don't believe Caldigate and am fascinated by how Trollope skips, will not tell us, about this hero's time in prison. He had himself seen convict places, talked in (sickening terms) of "convict odor," opined how convict labor was great for building roads cheaply.

I totted them up:  23 fictions, subdivides into 14 novels, 9 short stories. Plus enormous travel book and some settler colonialism journalism.

But then there's this very funny passage (to a Trollope who has had dinned in her ears how whatever his faults, Trollope is readable), this funny passage in Anthony Powell's Dance to the Music of Time:

In The Soldier's Art Nick has become an officer serving a clearly philistine General who (much to Nick's suprize) is one night discovered "sitting on a kitchen chair, his feet resting on another, while he read from a small blue book that had the air of
being a pocket edition of a classic."  After some talk about some (silly) success, the general now in a good mood, reveals what he has been (unexpectedly) reading:
suddenly, he raised the book he had been reading in the air, holding it
at arm's length above his head.  For a moment I thought he was
going to hurl it at me.  Instead,. he waved the small volume backwards
and forwards, its ribbon marker flying at one end.
'Book reader, aren't you?'
'Yes sir.'
'What do you think of Trollope?'
Never found him easy to read, sir.' . . .
My answer had an incisve effect.  He kicked the second chair away from
him with such a violence that it fell to the gound with a great clatter.  Then
he put his feet to the floor, screwing round his own chair so that he faced
me.
'You've never found Trollope easy to read?'
'No, sir.'
He was clearly unable to credit my words.  This was an unhappy
situation.  There was a long pause while he glared at me.
'Why not?'' he asked at last.
He spoke very sternly.  I tried to think of an answer.  From the past,
a few worn shreds of long forgotten literary criticism was just pliant
enough to be patched hurriedly together ...
'...the style ... certain repetitive tricks of phrasing ... psychology
often  unconvincing ... sometimes downright dishonest in treating
of individual relationships ... women don't analyse their own
predicaments as there represented ... in fact, the author
does more thinking than feeling .. of course, possessor
of enormous narrative gifts ... marshalling material
... all that mounting to genius ... certain sense of character, even if
stylized ... and naturally as a picture of the times ...'
'Rubbish,' said General Liddament.
He sounded very angry indeed.  ... [He] thought for a long time,
perhaps pondering the question . .  [Then] he set [the second chair] carefully,
quietly, at the right distance and angle in relation to himself.  Once more
he placed his feet on the seat.  Giving a great sigh, he tilted back his
own chair until its joints gave a loud crack ...
'All I can say is you miss a lot.'
He spoke mildly.
'So I've often been told, sir.'
'Whom do you like if you don't like Trollope?'
... Who was there?  Then, slowly, a few admired figures came to
mind--Choderlos de Laclos--Lermentov--Sveno .. Somehow these did not have
quite the right sound.  The impression given was altogether too recondite,
too eclectic.  Seeking to nominate for favour an author not too dissimilar from
Trollope . . .
'There's Balzac, sir.'
'Balzac!'
General Liddament roared the name.  It was impossible to know whether
Balzac had been a very good answer or a very bad one.  Nothing was left to be
considered between.  The violence of the exclamation indicated that
beyond argument.

Well, how about it? Are Trollope's women unreal?  Too many of them are mindlessly obedient to males or parents I'll agree. Is he dishonest about women's sexuality, their thoughts?  That's the serious thought implied.  Powell creates females to fit his agenda for women.

Is his style tedious? Balzac: well I have a hard time reading Balzac. The Wild Asses' Skin opens with a long chapter which if I was a 19th century person seeking to open a printing and publishing business would fascinate. But I'm not. Is Powell teasing us with one of his real sources, an influence?
At any rate I continue to be able to read Trollope even in the most inauspicious of moments. 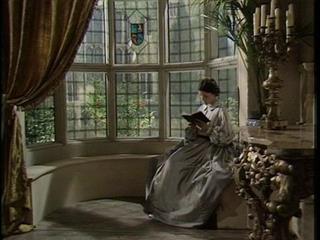 Caroline Mortimer as Alice Vavasour in The Pallisers (from Can You Forgive Her? Raven is hostile to this character, and the quesion becomes can you forgive either of them?