I recommend watching this Amy Goodman interview of Ta Nehisi-Coates on DemocracyNow.org. She is absurdly reverential at moments, almost folding her hands, but her stance is preferable to the cheap shots Cornel West has taken:

He is eloquent about his book but as a reciprocal reaction to his real candour, I found myself aware how much further along at least in talk are black people as a group as opposed to women. He may not be able to do anything about the plunder and cruelty of whites to black people so he has to go to Paris to live to protect his son while being a person in the literary journalistic world, but he he can talk about it, can speak truth about the terrors of being black, the senseless murder and destruction that goes on, the system that supports and fosters this among mainsream decent left people who are not asleep (as in his Atlantic article about how black people have been prevented from accumulating money or property, demanding reparations). 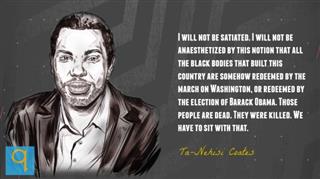 Feminists can't or aren't. Coates says that black men and woman walk in fear of their body being killed. Everyone might agree that's wrong - though a huge number of people will carry on imprisoning, murdering and allowing others to murder black people. There was actually a Ku Klux Klan rally on the steps of the South Carolina statehouse when the confederate flag came down. They sported swastikas. That meant that they will carry on murdering even if they don't have a flag there anymore.

But people don't agree that a woman's body is her own and men have no right to it, society has no right to make it have children, no right to demand it shape itself to please men or be frail -- legislation passed everyday to invade women's bodies, refuse these bodies help. The supreme court says people have a religious right to do this. The problem here is (as with black people) it's not just the laws that forbid the worst of behavior (which is nonetheless practiced) but customs of all sorts, the types of things Coates says he experienced growing up.

Well as girl and then young woman I found the continual demand for sex was seen as fine and manly; the word "bluestocking" is so fearful because it's connotations are a woman who doesn't look at men, children, sex as necessary to her life; the librarian and her books is impugned. There are many issues which swirl around this, like anorexia (where it's fine to torture women to get them to eat), to being fat (if that's what your body is), and therefore humliated, so many swirl around sex even if they are expressed from the point of view of how the attitudes towards women's bodies affects their career possibilities.

A woman can't write fully making the case she wants in an essay unless it's done through irony (not saying the thing you want to) or at a high level of generality, because few will sympathize if you come down to particulars.

P.S. The title of his book did make me think of how Trollope often presents the self against society, where the self is vindicated. Perhaps this shows I read too much Trollope. I used to see real parallels between Trollope as he presents himself in his Anglo-Irish early phase of writing and Baldwin's tale of his first years as a writer.
Collapse