I begin with a soothing video -- surely needed during this season


as a preface to two linked topics: climate change and the spread of cancer everywhere to all age groups.  The chemical manipulation of our environment.

So to the heat:  We are still having shortened daylight here in a mid-Atlantic state of the East Coast of the US, but otherwise he climate is really changing. Well, duh. Summer in winter?  Well in Virginia (not far from DC so by the water) we are having a summery-winter. It's not summer and it's not an Indian summer and it's not fall. It gets quite cold when the sun goes down; dawn is dank and chilled but by noon it's balmy with a chill in the air; waters are higher too (as in the Potomac). The bulbs I planted do not grow as they do in very early spring/late winter (as it once was). You do need some sort of coat or sweater. If I open windows too wide, it gets too cold in my house. The cats sit by the grates still.

In the morning as I awake and the sun creeps into my room (like it did in the older winter) it nonetheless feels hot in the way it does on an early summer day. And at night the house is hot the way it is after it's baked all day in summer. It's just not baked with quite the same high temperatures.

My younger daughter went to the University of Buffalo to become the librarian she is today. She used to talk of small, medium, and big snow events. The first January she wrote us that she would never leave her room again, it has been that cold for so many weeks. She now tells me it has yet to snow in Buffalo. This has not happened in 150 years. It's a new kind of season.

Then cancer. The New Yorker is not usually stupid or mean or obtuse, as witness this week's cover by Eric Drooker: 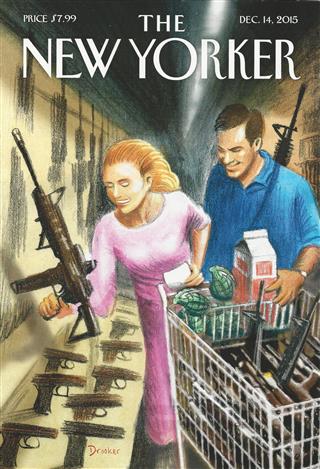 But they can be, as witness a peculiarly small-minded essay on Thoreau several weeks ago, spiteful ("pond scum"?), written out of the new certitude that people who retreat are idle self-indulgent fools, living off others, and anyway only social life is life. The moral myopia is Kathryn Schultz's. 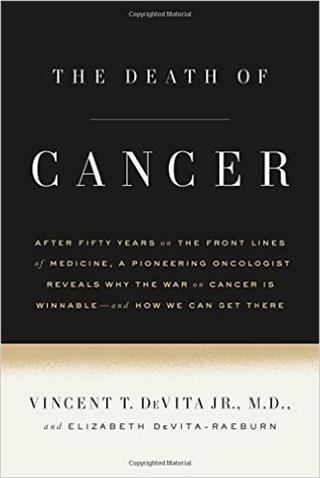 I usually don't review reviews, especially when I've not read the book through. But Malcolm Gladwell's dismissal of T. De Vita Jr's admittedly oddly titled The Death of Cancer in the Dec 14, 2015 issue of the New Yorker deserves to be called the ridiculous point of view it is. Gladwell's complaint is De Vita was not a team player. Hence he was didn't last when he reached the prestigious position of physician-in-chief at Sloane Kettering. The chapters' demonstration is that 1) the medical establishment does not look for a cure for cancer; 2) is far more careful to follow protocols lest anyone be sued than try to cure a particular person's cancer; 3) lets people die knowing this is happening and something could have been tried to stop it; 4) carries on with bad policies and procedures known not to help but perhaps harm lest a particular group of doctors (breast cancer folks) or arm of the industry (any of the chemo drugs) make less profit. Gladwell calls all this "deeply unsettling." But clearly he's not unsettled by what DeVita shows the reader. What he doesn't like is DeVita's take on institutional politics. (We may assume Gladwell wouldn't like Thoreau either.) Gladwell's priorities are as screwed up as the people treating cancers who can't predict even what their medical treatment will result in. Read the review by all means. Gladwell is conscientious and gives his devil his due, and reports the important content of De Vita's book.

In the light of some replies I've gotten I want to say that cancer is anything but dead and among the things wrong with this book is the false upbeat framing of it. Cancer is spreading, more kinds are emerging, more rare kinds are becoming common and more and more people develop cancer at an early age: not only is our climate changing, but it and all we eat and drink is more and more poisoned by cancer-causing chemicals.