I can't resist writing that Trump's latest move in his attempt to wrest the US gov't into an organization he personally rules, together with his continued refusal to release his tax returns, shows extraordinary and ironic gall.  As I've done before, I bring together a few articles I've read on 3 topics for the reader's perusal. In this case two of the essays I summarize and quote from are not on-line but in print newspapers.

He has hired as his campaign manger Kellyanne Conway. We are told she "has been close to Trump for years."  In physical type she resembles his wife, Melania, only with a much much harder face. A resume appears on wikipedia. Reading around, she is closely linked Fox News and affiliates, with Dan Quayle (Bush senior's vice-president), Gingrich, Pence, Cruz; she has been involved with those who have been bitterly pursuing the Clintons for years. She's one of these power-money-high prestige hounds who fancies she knows what women want: women don't want to hear about what's called women's issues, but how they are accomplished, and how to achieve power and influence.

If you can endure the sound, Bloomberg press gives an apt characterization along these lines of the public reasons for the relationship between Trump and this woman and why he chose her: she is said to be an expert on how to appeal to women, and Trump gets along with her, listens to her. A similar line from the New York Times. Another angle is how she began as a lawyer. Not all lawyers chose the profession so as to do honorable work of justice, equity, in law.  The word repeated over and over again, is she's now and has been for years a pollster, paid as a pollster. Her husband is the lawyer. Are pollsters valued because they produce polls which predict the candidate the person who pays them wants?

Think about how it's said Roger Ailes, now accused of continual sexual harassment, raping of his employees is now also said to be next to Trump. Was it Ailes that recommended her? (Or Trump's previous long knowledge .... )

It doesn't take much to find Conway uttering anti-women comments on rape. Her husband was one of those getting up Paula Jones's suit against Bill Clinton. So she does think about women's issues we see.  This woman is a feminist? On what grounds?  what integrity can she present herself with?

She has starved herself at times and is even now unnaturally thin. In some photos her breasts look unusually large for a person of her weight and cragged body type: 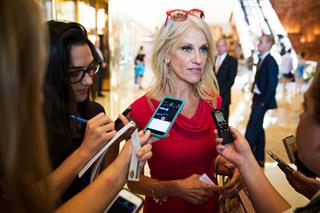 Mark A Patterson (Washington Post, A15, Aug 18, 2016) wrote:  Not just presidents and vice-presidents voluntarily, but "dozens of nominees to Cabinet and sub-cabinet level positions in the Treasury Dept, Social Security Admin, Dept of Homeland Security, US Trade, and other agencies and those in gov't, who want security clearances are required to submit their tax returns to the Senate to be reviewed by appropriate committtees.  Senior federal appointments, no exception for those who work for the IRS, nominees are asked detailed questions about current and recent audits. This tax review process for those on the Senate Finance committee can take three years. Interviews of nominees are included. It's often presented as making sure they are not susceptible to blackmail. By his refusal, he reinforces the justifiable suspicion he has not paid any taxes for years. This symbolizes a flagrant disregard for what was once presented as a civic duty of a citizen: "Paying taxes is a fundamental obligation of citizenship, and the public deserves to know whether its [proposd] leader has fulfilled this obligation"

Hal Crowther today first detailed the history we know: Trump was a special protege of Roy Cohen, a cynical and amoral power broker in the 1960s; beyond his fraudulent university, and bankrupting of people in Atlantic City, there have been 3,500 lawsuits, ruined fleeced investors (&c). He then wrote very powerfully: "No responsible grownup anywhere near his right mind would vote to give this evil, infantile, ridiculous man the most powerful job in the world. Conversely any one who would cast such an irresponsible vote is far beyond the reach of reason or persuasion, in any form .... a hustler ... who speaks, acts, and presumably thinks like an emotionally disturbed adolescent .... his ghostwriter (The Art of the Deal) helped him turn his outbursts into sentences [and has now revealed him as a] sociopath. Trump's boorishness and tastelessness, symptoms of a putrefying national culture defy all precedent."  Like others Crowther shows how Trump's success is the natural outcome of the decades long Republican use of race-baiting, contempt for "the elite" (not the rich but those who are educated, those who merit jobs by their skills and talent and knowledge. He suggests Trump is just the most outlandish of a growing group of horrors, some of which we saw on stage on the debates in the Republican primaries.He suggests we are going to see more of such people running for powerful offices even if Trump loses. (Progressive Populist, Sept 1, 2016, pp 1 and 8).

Owell defined double-speak as saying one thing and doing its opposite; Trump has perfected this in reverse: he does things and says the opposite; he smears his rivals by accusing them of what he is and he does.