This week I've but one essay to share,. but its excellence more than makes up for my not having another: Rebecca Solnit, London Review of Books, 19 January 2017, 3, 6-7: Penis Power

When Solnit tells of the nightmares, inability to sleep, and hideous memories Trump's stalking of Hillary Clinton on a TV stage on 9 October 2016, prompted in so many women, she spoke for me. I wake with this monster's image in my head; since he's been elected, he has chosen to disseminate photos of himself against a black background looking fierce, or in various official situations grim, mean, inexorably dense.

She then accurately describes the endless variations of misogyny which gave a man unfit to president of the US, and affect the fates of the world, the office.

I saw a great play today, August Wilson's Fences  (as a film with Denzel Washington and Viola Davis) which reminded me of how much living on without my husband is a kind of torture for me. She cannot leave him; she has given all she has to him; she cannot conceive of life without him. He is the heart through which her blood flows too: 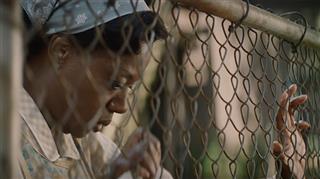 I imagine it was close to the original play: the only departure I've read is the ending. No one says what that was, but my guess is not the final total justification of Troy who behaves horribly on and off to his wife, his sons, everyone but his male peer friends. He takes out his anguish on destroying and bullying others. Wilson feels that's okay -- males who are put down are accorded tremendous compensations over everyone else. he is a deranged person -- as Frantz Fanon said, the colonized, the semi-enslaved into bleak servitude becomes mentally ill and wreaks his misery on others: Writing on Alienation and Liberty (another good essay linked in for you, gentle reader). No it was the final moment where first whatever he did was justified and he was made into a kind of God-man in the family by the wife he had betrayed and bullied, even as he was her only protection, source of income, of pride, security; and then (as in other movies and plays I've seen) from heaven we get a trumpet playing and light streaming down as if it were some baroque painting out of which his great spirit were shining. Both together almost ruined the experience for me. I have read that but one congressman in all congress doesn't have a narrow religious affiliation and go to some church; yet studies and statistics suggest some 30% of Americans if asked will say they have no religious affiliation, no religious sect identification and many of these will call themselves agnostic or (less often) atheist. 30% of Americans have no representation of their secular point of view in congress.

I need not detail once again all the destruction Trump has promised, and what he has done so far: free speech on the Net, truth, civil rights, rights of protest, health care, women's health care, federal gov't workers and agencies. The list is long and havoc-causing potentially already. Each day new cruelties and vindictiveness and sneering triumph over the vulnerable are recorded.

All day I feel under assault -- the continual menacing pictures of Trump. He deliberately puts him photos of him against a black background looking like some whirlwind ferocity, a grim or inexorable expression on his face. Then by the hour a new horror. Now the reporters who reported on his inauguration protests are accused of felony as the reporters who reported on the Dakota Access Pipeline.
I don't know if I can manage four years of this. I fear for the destruction of the gov't programs and services that make my life endurable. I'm especially frightened at the thought I'll lose my house. To me despite what I have said about it, giving words to how I surmise my upper middle class neighbor see and talk about my house, it is a sound comfortingly solid brick, two squares of a house. I am proud to live in it. When I look around me and see cleaning teams leaving other houses, just like mine, or mowing teams, contractors come to replace, improve, renovate, I am bewildered at my luck. I never expected to end in such a position and know it is precarious without Jim. The house holds my computer and its line to the outer world (an IT guy included), my books, which enable me to reach back to Jim and to do research, read for reviews, papers and teaching. I cannot conceive that I could know any comfort without it and them.

I am become unwell under this daily assault. so last one: how to #stayoutraged without losing your mind; for me this means having oneself torn to pieces. What is so striking is how the author says, without exception, every institution and belief, civil protection, good people hold is going to be attacked, and if possible destroy in its embodiment by Trump and many will go the wall, without exception. There's been nothing like this before in my lifetime in the US.