As each piece falls into place each morning and I see more signs i.e., concrete conditions, laws, attitudes of Nazi and/or fascist  states I grow more alarmed and depressed as I see how helpless the majority of the US population is against this -- and to say for now is to imply this will be easy to undo. Far from it, for this state has been forming since the 1970s when ALEC and the like saw their way to destroying what democratic ropes we had inside an oligarchic state.

Helen Keller at work in her study

This is this week's most crucial story: what do Helen Keller, Hilary Clinton and Barry Goldwater have in common?

Yesterday morning it was reported that Helen Keller may be removed from the Texas school curriculum; she is not alone: they are removing Hilary Clinton (so she never won the 2016 election if the majority vote mattered and no woman has run for president), Barry Goldwater (the only Jewish man to have run for president in the US) is to be erased under this state-wide plan. Most of the news-stories report the rationale is children have "too many names to learn," or they would do better to spend the 20 minutes "on something else."  But click on the story I link in and you will see:

It seems Helen Keller does not best represent the concept of citizenship. A military man does, a warrior (trained ot obey, kill or be killed), or someone doing an active heroic deed during an emergency crisis. Only men and fighting. A skewed notion of citizenship, no? And there are first and second rate citizens -- this sheer Nazi thinking. Next step, down the line less rated citizens don't deserve to go to school, nor maybe even live lest they marry in. In thought a fundamental betrayal of all humanity. Most of us are disabled in some way; all of us are vulnerable when infants, all when very old.

What's the next step? I know that police can abuse people with mental disabilities with impunity. I've seen this happen twice with my daughter who no longer uses her driver's license after an incident where a cop mercilessly bullied her for driving slowly (40 miles an hour) in the slow lane. I read of how when foolish people call the police because a mentally disabled person in their family is "being difficult," the police can and do shoot to kill when they come in. W

13000 children are now in jail, and Trump is moving money from FEMA to ICE which ought to be abolished. Private prisons are everywhere, and now detention camps are increasing, and the conditions in these are worse than Nazi Germany (no books allowed in effect, you have to pay exorbitant fees for a phone call, terrible food, you are forced to work for pennies or put into solitary confinement so slavery). Who are all these detention camps for?

Last night on PBS I saw that the gov't is supporting the spread of abstinence only health care clinics for women: they will not even help you to a contraceptive: an absolute lie as you can't tell what they are until you go in, probably have to register your name. Two officers in a car survived and the women they took up to "save" were "drowned" -  so don't be a powerless woman either. Diane Feinstein kept back from public knowledge that Kavanagh's earliest history shows him to have a ruthless thug towards Christine Blasey Ford; did Feinstein do wrong: Dr Ford now lives under death threats; she is target of ceaseless castigation; her life perhaps ruined. Most of all this is the glaring sign of Nazism; deep misogyny with women without liberty is central to such states.

The US is now a Nazi state with a veneer of democracy, and is on the way to being a white supremacy: voting rights of all curtailed, but especially African-Americans (by jailing them, and that's easy), hispanic people with citizenship investigated to throw them out; immigration down to a trickle.  Severe prosecution for one woman an official discovered voted because she did think she had the right. She may think again for many years in prison.

Black people murdered with impunity.  Non-human animals included:  during the intense tropical storm that washed away some of the Carolinas and threw the pollution from abusive animal farms millions of chickens, turkeys, pigs (sensitive intelligent mammals I hesitate to say like us) 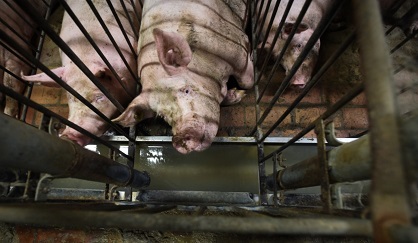 coal ashe coal companies refuse to remove from waterways: this one reminds me of the famous Lord Mansfield decision over how someone could not own a slave in the UK in the 18th century: the origin of the case was the drowning of hundreds of enslaved black people in the ocean because it was cheaper than transporting them to the US from Africa.  How the mostly black and poor white people living near these places have a high rate of cancer and other diseases from polluted local environments.

And not just white, but white Christian (see above Barry Goldwater). We are to remember the state of Texas is heavily gerry-mandered and this move does not represent the majority of people there at all. But that too is part of fascist dictatorships.

Most young adults I know work in jobs with no paid vacation, no paid sick leave, no pensions. Keep the average person deeply in need and exhausted from making a living. And charge high for healh care.

Reputable newspapers ask solemnly if the US is becoming a Nazi or fascist state, and mostly conclude not so. I say if it looks like a duck, quacks like a duck, swims like a duck, it's a duck. Is there any cause in nature that makes these hard hearts? (Shakespeare, Lear). We can start with greed, desir for ceaseless money, no social conscience taught (quite the opposite) and strict patriarchy.

This week's crucial story is about the idea that people with disabilites are not worthy of embodying the concept of citizenship, and the thinking they are second class citizens and how this fits into the society now being imposed on a majority of US people who don't want this, but are acquiescing.

Evils that befall the world are not nearly so often
caused by bad men as they are by good men who
are silent when an opinion must be voiced ...