So, if you can't see yourself reading this dense often abstract text where whole pages are blacked out, here is it is pictured, 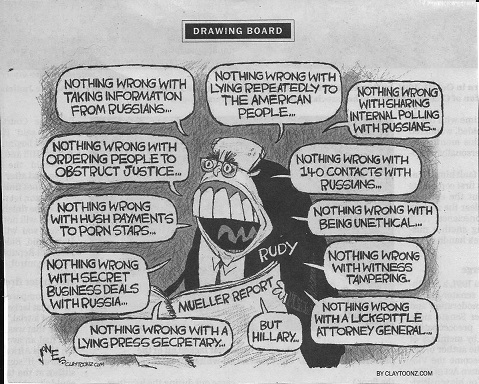 And then brief advice:  from Truthdig:

A preface: you should really read the report or one of the good newspaper accounts: the Washington Post devoted three sections to the report; it is wholly on line with redactions obvious.

The analysis is by Bill Blum, former judge and death penalty defense attorney

Do not trust anything Attorney Barr has said about the report.

Mueller did not find there was no evidence of conspiracy. Nor did he make any finding on the misnomer of collusion.

Trump did not cooperate with special counsel

Mueller Declined to Make a Formal Finding on Obstructions because of the Justice department's policy against indicting a sitting president.
Nonetheless, he concluded the president could not be exonerated of ostruction.

Mueller did not request Barr to draw his own conclusins on obstruction.That decision should be left to congress by means of an
impeachment investigation. 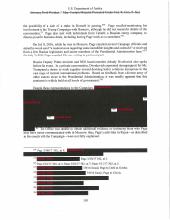 Now having read some of it despite the narrow point of view Mueller took as the perspective of his task, it sheds light on the political world and justice system  David Cole in the New York Review of Books seems to me to be the best commentary on the report's contents and how something urgent should be done by congress:  An Indictment in All but Name. Heads of topics:

The report establishes beyond doubt that a foreign rival engaged in a systematic effort to subvert our democracy ...

The report portrays a consistent pattern of deception and repeated efforts to impede the Mueller investigation.

Mueller also reveals that Trump directed White House Counsel Don McGahn to fire the special counsel on accusations of conflict of interest that Trump knew were groundless, and after this was reported by The New York Times, Trump instructed McGahn to lie about it.

The fact that a sitting president cannot be indicted does not mean that he cannot be called to account by other means. And some form of accountability is essential. What Trump has already done is profoundly damaging to the institution of the presidency and our system of justice, but we will make it worse if we collectively fail to demand a reckoning. ...