The Washington Post today has described these tweets and said that Trump cannot by himself make the crisis into no crisis or go away as he cannot control natural processes. They put it that Trump doesn't actually have magical chaos powers. That is not to expose the false analogy.

Cartoons because they are pictures give an an emotional feel but don't explain the problem: 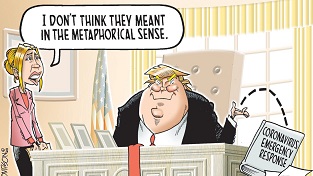 All his tweets depend on a false analogy beween all flues and coronavirus.  First and foremost, all flues are not alike; each flu is sui generis. You cannot extrapolate what happens from one flu for another. The literal number of deaths from projected percentages is much higher than intuition tells the person and cannot be numbered unless you use mathematical formula. This flu is by itself as an individual far more deadly than the virus which killed millions in 1918.

Second, to reason from the number of deaths in one case where say it has been high to say therefore it is okay that we have these same number of deaths again is profoundly inhumane. So what if the number of deaths turn out to be the same. It's that we want no deaths, few deaths, and the people he is trying to fool or delude care about their deaths. To say that another set of thousands of deaths are okay is to day deaths of all these people are fine. We can see here why he does not obey congress and stop supporting the Saudis murdering and maiming thousands of Yemenese.

Why does he reason this way? he cares about how he looks in public -- about say whether he wins re-election.  His administration will do nothing ever that interferes with anyone large making profits. One of his appointees responded to a senator that the Trump administration would not provide free test kits or free vaccine because that would ignore (and by implication could overturn) capitalism. There should never apparently be anything exchanged between people without a profit and the person wanting it having to pay money.

This is preposterous and cruel. It means you should never interrupt or make any exceptions to capitalism. Therefore you should not help people who are starving to death during a famine. (It is the false reasoning Anthony Trollope used to argue that no free food should be given to Irish people in 1847-48 during the height of the potato famine). It shows the same indifference to the health of thousands of individuals, to their very lives that we see in Trump's reasoning in his tweets.

Luckily the US is organized federally and within that by states. Thus local states can and are organizing plans and working to prevent, slow down and help people who are catching the coronavirus. The states and localities are taking care of sick people or people in danger of sickness. They are canceling events, offering helpful instructions, asking people to self-isolate so we won't have to go into any quarantines.

"reality must take precedence over public relations, for nature cannot be fooled."

On this minority report, which was put at the back of the larger report.

One must distrust the almost-the-same [thinking] (sodium is almost the same as potassium, but with sodium nothing [no explosion] would have happened), the practically identical, the approximate, the or-even, all surrogates, and all patchwork. The differences can be small, but they can lead to radically difference consequences, like a railway's switch points; the chemist's trade consists in good part in being aware of these differences, knowing them close up, and foreseeing their effects. And not only the chemist's trade.  (close of "Potassium, in the Periodical Table)