Since I last wrote there has developed an utterly unprecedented situation where millions of people are staying in their homes, and economic and social and political and many other activities are for now ceased -- except insofar as people who have the equipment, capibility and job type are in communication on line. In the US we have become two worlds: the middle class at home and online, the jobless at home and (if they have access) online. And the many workers risking their lives in hospitals and delivering mail, in supermarkets, drug stores, keeping the basic supplies of the world available.  Collecting garbage.

Zoom is presumably making millions. As daily the situation changes, grows more dire, and in the US the federal gov't under Trump refuses to do the most obvious decent things to help all people, articles pour out, as well as articles exposing what Trump and his regime are doing. I have not been able to keep up as I try to learn how to be online, and perhaps this summer teach a course using Zoom on a webinar platform (is what it's called). So my weekly blog is a summary, a perspective, an outlook with a few articles highlighting the most information -- about what is happening economically. And I contrast what Biden, Sanders and Cuomo are doing right how. And I talk about Trump's daily 5 o'clock propaganda stunts. 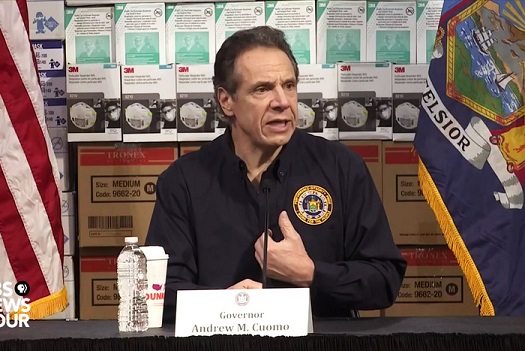 At some point in his 2 term presidency Reagan said this; my blog tonight is intended to point out that the gap that is paid such attention to between Trump's pretense at caring about COVID-19, how many die, who, when we see that he refuses to order companies to manufacture supplies, and then when he does, he deliberately sends all that Florida, Texas and other Republican states, particularly with governors who are sycophants to him want and comically inadequate supplies to NY, California, Michigan, and democratic states, mocking them, accusing the governors of pretending to need more ventilators or their health staff hiding masks -- all this is not the gap to pay attention to.   It is all words, wars of words where he claims to be doing so much and does as little as he can get away with. 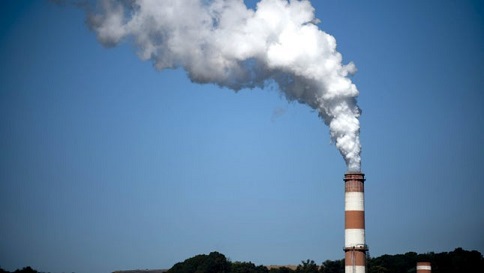 Companies need not pay the fine ....

The gap is between what he does and what he says.  Early on when it became known the virus was dangerous, he tried to buy a German company he thought near manufacturing the virus so he (or him through the US) could control, charge high prices, weaponize the vaccine and viruses against other countries. He will not lift sanctions against Iran no matter how many thousands die. But it's not the dying he cares about, it's trying to destroy the present gov't so he and his crony corporations can go in there and take the oil. The war in Iraq was a success for GW Bush-- it made millions for Cheney's corporation (and him). The trillion dollar Congress was so cowardly as to sign is basically a huge give away to corporations -- especially airlines, hoteliers -- with Trump in charge of a uncontrolled huge fund not specifically earmarked. Pelosi said there will be gov't oversight; as he signed it, Trump said he would issue an executive order over-riding that. He is unashamed. The EPA is suspending environmental laws on the grounds they can't enforce them? they are too much trouble? It's a transparent non-logic.  Trump's regime says this is temporary. /So while for the health care unit set up to centralize responses to pandemic was eliminated, here he need not eliminate the agency, just cease its functions .... hollowing out the US gov't at every point. Meanwhile he wants to go to war with Iran (they are especially weakened right now -- so he can steal their oil).

Trump would postpone the election (have none if he could) and certainly stop as many people from voting as possible, so he does not want a mail in election: he said the Republicans would lose. They are a very much minority party strangling everyone else. In each and every act he is seeking to enrichen himself and his friends. Tonight he pretended drug warlords are suddenly taking new advantage of the virus so he must put military in the Carribean. He has invented (with the help of deeply problematic witnesses) a plot he says Maduro is following to fleece his people; Maduro is a democratically elected president trying to protect his people -- right now in the midst of this pandemic, Trump wants to go to war. At the same time he will not open the medical exchanges of ACA so that US people can buy insurance; they just want the right to buy some. Does he hope the types of people who would rush onto the exchange will die?

The round-up of articles this week follows the real Trump and ignores all his professions about health care.

There are the many ways in which he resembles Hitler -- he is actually worse because he is shameless about what he does, boasts.

This analyses the so-called stimulus package, which is a gross give-away to the very wealthy with hardly adequate support to workers and small business and ordindary people. $600 a laugh, so too $1200 . It resembles the worst aspects of the 2008 bill.  The Lion's share. 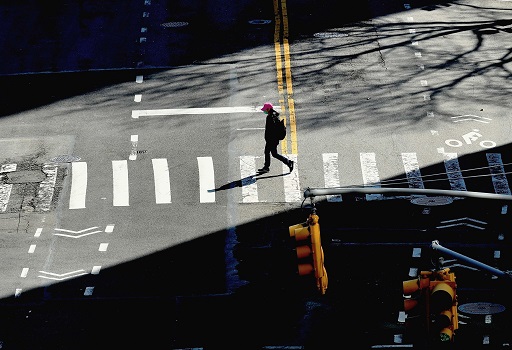 It's equally important to realize that Trump could not do what he does if a group of values shared by millions or assumed as just fine were not supporting him. One is the refusal to guarantee employment for US workers, the refusal to help them, and the refusal to offer medical health care to all regardless of whether the person has a job. The New York Times show how just about all other countries are protecting workers, paying their salaries, preventing them from being fired so when the quarantine is over they go back to the place they were working. Also these gov'ts are really shoring up small businesses:

Why are millions of jobs destroyed in the US, and on top of that health care remains tied to jobs so lose your job, you lose your ability to have affordable health care

Can you think of any stupider, dumber commercial to pay for just now than Biden assuring us he is not for Medicare for all.  Here we are thousands sick, many dying, frightened, egregiously obvious I hope that bills for this are outrageous, that there is no system and there is he -- don't worry folks I'm against medicare for all as it will cost too much. Is there no one on Biden's staff with the slightest sense of moral imagination and what is ludicrous. Does he know millions are deeply frightened at the bill they will be hit with if they go to the hospital. Apparently not.

Sanders is dedicating large portions of his campaign funds, what he gathered to make a campaign he now can longer do, to helping with coronavirus. He would have set up medicare for all, & everyone would have stability and the system itself improve with adequate continual funds and respect for science and scientists -- he is turning his campaign into coronavirus relief.

For my part if it were not that Andrew Cuomo until this pandemic was one of those cutting hospitals, driving people off medicaid, a centrist democrat, I'd say let's have a brokered convention.  It's apparent the man who would do something (Sanders) has been maneuvred out by the democratic establishment and a sortof puppet non-entity (Biden) put in his place.  His is the must-see TV because honestest show on right on. The war of words with Trump included Trump's threat to declare all New Yorkers must stay home no matter -- and suddenly -- a declaration, Cuomo said, of war on the city. I omit Trump's needling and ridicule of the Michigan governor (a woman).

Here of interest is how Trump's nightly 5 o'clock show has a popularity akin to his Apprentice:

What's telling -- what to watch -- is not so much how Trump publicly demands Governors "make nice to him," calls them liars when they plead for equipment to save lives, laughs at them and all those dying -- except to say I don't remember Hitler making public the extermination camps and starting to needle other Jews in Germany and socialists and disabled people. Trump has these past few days shown himself worse than Hitler - worse. He does not think he needs to hide his delight in people dying, his spite.

What I'm calling attention to is Trump's supporters. Not the superwealthy who will now have a slush fund to grab from (see above), but the "base" those millions with little money who carry on being gladdened. I've now (unfortunately) read a number of Trump supporters supporting his profoundly cruel behavior to thousands of people - he beats Hitler in numbers of people dying too. One person in a thread used the term "gross weirdness" to describe some of Trump's way of expressing an idea that is so wrong in information and out of kilter with common reality and usually filled with intense resentment. That is what his supporters' words are like; they are usually in a tone of hard sarcasm and I saw how one group were fueled clearly by hatred of the people a governor represents plus the person who has described Trump's horrible behavior. This discourse will use words like the Governor of Michigan has "been strangling" the population -- just one verb that makes no sense. I often have no idea what words like these refer to. I realize now a sizable majority of people in the US produce these discourses, will always vote for Trump because they love his hatred, and they are so gerrymandered into power it might be likely we will not be able to get rid of him -- we (those against all this horror) have no army and have been shown (by the failure of the impeachment hearing) seen to have no way to dislodge him and them if Trump refuses to hold an election.

A few words about what these supporters enjoy: Trump seeks to unnerve the reporter, to come back yelling when least expected, to accuse harshly, castigatingly when a reporter points out his lies, and various destructions of healthy care agencies -- he doesn't want them because they get in the way of profit making. What they enjoy is the hate,  Trump's nastiness when he calls others nasty and terrible.  One reporter he particularly dislikes is an African-American woman who works for PBS reports (combines so much he loathes) because she persists; the first time he did it to her, she was upset, but since then she has learned to remain unrattled; one of the many TV incidents over the week showed a second reporter given the mic after she was cut off, so he gave it to her and she proceeded to finish her questioning: 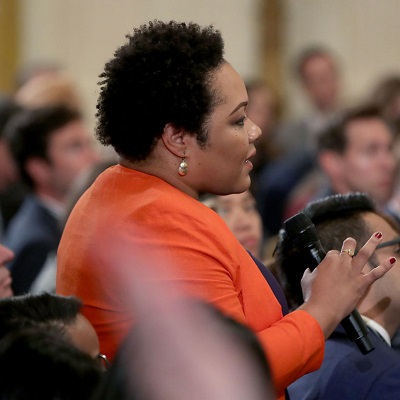 Persistent and clearly articule she points out the gaps between what he claims and what he does....

Alas, these 5 o'clock shows have gotten him a 60% rating approval according to some polls. He didn't want a press secretary; thought he could govern by tweet, now he is back on TV -- ironically, he did it because he can't have his rallies.