You will perhaps remember the story I told about how in my neighborhood about how racism works in the US and is related to class and status insecuriy: a young black man came into my neighborhood (like white men do) soliciting for work on houses; how several people came on the list saying they had informed the police, and insisting the man's  behavior was "suspicious"  That I came on and said nonsense, you are singling him out because he is Black (a fact no one said aloud) and in my second you are endangering his life and setting up a situation where he could be killed.  That I was told I was the racist, received hate mail, also 3 emails from people taking my attitude but never putting anything on the list. Seething racist hatred and fear and resentment I saw there.

I have gotten back on the neighborhood listserv -- as it is very handy to find out practical things -- like my lights go out and the laptop which operates by battery keeps up for a while, I can go there and find out if this is neighborhood wide. Or ask for a good handyman.  I had to ask the two gay guys next door (husbands with two dogs) to help me; they contacted the listowner and he put me back only he did it as separate messages.  But I don't want to bother him to make it a digest. I tell you this to give you another insight into the crazed race-and-class situation going on in the US today.
Now I'm back and I discover they have not dropped this but are now regularly reporting any person (black or white) whom they see in the neighborhood "who does not belong."  They are partly covering up that the motive or start was fear of Black people and complete ignorance Black people are just like white people and that young man was no different from others not Black asking for work perhaps. This is a very expensive neighborhood I live in. I pay taxes on this house saying it's valued at well over half a million. Mine is one of many smaller houses in this neighborhood. My blog was about status insecurity among these people

Every couple of hours or half day or so one of these people report on people "who 'dont' belong here," are "suspicious" in some way -- and those knowing this is nuts are silent. I suppose what they would like is a gated community. 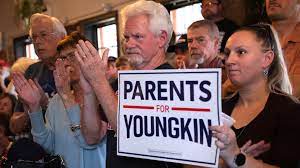 Elections are being won on the clever slogan of "Parents for X [GOP person]."  Ordinances passed around the country forbidding the teaching of what lives have been for Blacks in this country, Black texts and any truth-telling about the era of racial terror ("Jim Crow" so called).  Ths is a sort of ploy to erase the teaching of what happened in Reconstruction for real; the era of racial terror lasting from 1876 to 1965 and not over yet:  continual lynching, arson destruction of Black houses, full scale massacres of Black neighborhood where Black people were doing well economically, and cutting Black people out of all gov't programs intended to help all working and lower middle class people.  See Eric Foner's books. 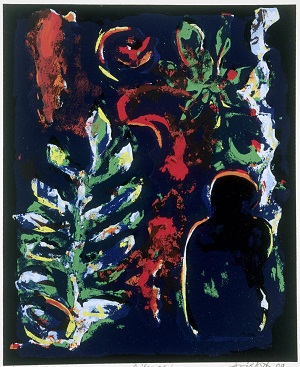 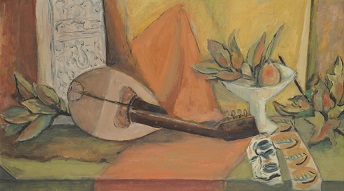 The  second one is a Still life with Mandolin by Alma Thoms ..

On another blog I told of how I went to a wondrous show at the Phillips museum where I saw a dual exhibit of African-American art:  Alma Thomas and David Driskell. I urged reader to go see it.  I did not say that the woman I went with to the Phillips said she is afraid to go on the Metro. She never said this but she fears Black people who look poor. Young Black men. She did talk of her years as a lawyer for just such people -- defending them in court (doing important good) but also how she hired a body guard when she visited them.  She did not come by Metro.  Nowadays she never takes the Metro.  She took a cab both ways from her house to the Phillips.  It's not that far but the Metro ride would be short too. She said she never ever opens her door to to people selling things, to unknown contractors ("solicitors").

Last there are now two cases -- a young white man who looks and talks moronly killed 2 Black people during a demonstration outright: he took there an AK-15, the judge is wholly on his side, that this was fine behavior and he killed these people in self-defense. Three white thug-types are on trial for murdering a Black man out running in a upper white neighborhood and although the area of the trial is 33% Black, there is only 1 Black juror, and now the defense attorney has complained that the Black family of the murdered man has "Black pastors" visiting him who are there to "intimidate the jury."

I retweeted on twitter a clip where Rev Barber (Black from NCarolina) is speaking out against this -- not crazily, patiently explaining these people were murdered because they were Black and the pastor who is Black is not some strange creature and there to support the family ; well twitter tells me that "something went wrong" and the clips won't play.  I also put this clip on FB and guess what FB tells me something went wrong and the clip won't play. I can't find a transferable image of him discussing this case; here he is discussing another similar one. 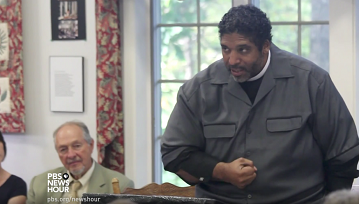 What I've typed out so laboriously are examples showing why there is a real chance the US will turn into a facist racist dictatorship. Biden passed part of his infrastructure but not the important social things, and he has to pass the voting rights act to allow the democratic party to survive.

Do notice how both Facebook and Twitter censored my retweets.  It was that and these neighborhood warning about "solicitation" and people who "don't belong" and are "suspicious" that prompted this blog.