One of the comments I got on my blog yesterday prompts this companion blog: "The trick is to love who you are ... "

That was a generous thing to say, and it strikes me as true (a belated response as I thought about it a little). I like the suggestion for a way into writing a memoir and maybe sometime in the 20 or so years left me I'll try it.

What I want to rejoin in a separate blog (it's worth it), is this feat of loving oneself is more than a matter of will or egoism, or self-blindness which many seem to have -  I've lived with people (not my Admiral who maybe I should start calling my Captain) who pamper themselves to the point I'm startled. My sense is the rhinoceros skin some people display in social interaction (or on listservs) comes partly from this firm self-love. Now many such people are working hard, spending their lives trying to achieve or look they are achieving what the average person admires. I haven't or don't or can't.

My point is it's hard really to forget the world's valuation of you. I try hard and talk about it a lot, and perhaps go further than many in going my own way in my own style (another road chosen and all that), but finally the world's view cannot be shut out. It stares at one in faces of others as one goes about the world, and the utterances grate.

Trollope has a sharp insightful bitter chapter on just this inability to shut out the world in his Lady Anna. The hero, a tailor, wants to marry the lady of the book's title. He visits the poet Southey (poor Southey, ever the icon for conservative rhetoric) in his old age. Southey tells the young man that if the two marry at first they will succeed in ignoring how others scorn him and look down at her for marrying him, but eventually it will affect her view of him especially if he does not succeed, and that will in turn affect his of her.

So the marriage will be a struggle.

The lesson to be learned is not to marry. Nonetheless, Trollope has his pair marry anyway and go to Australia as a place where they may escape the rigid class hierarchies of England. He found he could when he went to Ireland -- Anthony Trollope never went to university, and got his job only by his mother nagging someone incessantly through the patronage network to give him a lowly post in the post office at age 19. His father was mad and probably violent, his mother had a lover and wrote publicly and her older son lived off her. So not very respectable.  Trollope's biographers say he intended perhaps to write more novels about this couple's history in Australia but gave it up. Another cycle of books. See my Trollope section on my website.

It's not a lesson I would learn from this, only that the future may be blighted and hurt by what others allow and say. I imagine that Trollope meant to show his new chief couple succeeding very well anyway. 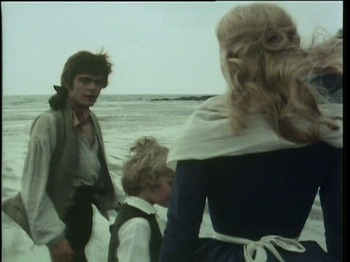 One of the early encounters of Drake and Morwenna on the seashore coast of Cornwall: she's a governess for her cousin Elizabeth's son, he's become the boy's friend. See my Poldark archive on Ellen and Jim have a blog two.

In Winston Graham's Poldark novels he has a couple who similarly fall in love across class lines: Drake the youngest brother of Demelza, carpenter by trade, he cannot write very well but can read, falls in love with Morwenna Chynoweth, daughter of a dean, of an ancient Cornwall family which has fallen into bankruptcy but prides itself on its rank and marrying into rich families who are buying this (imagined)  heritage. Really bad things happen to this young couple including a coerced marriage for her, nightly rapes, and a severe beating nearly to death for him, but it being a novel the bad husband dies, Drake recovers enough, and the couple do eventually defy everyone at considerable cost to their psychic energies. She gives up all income from the ex-hustand, is relieved to give up her son but is despised for it.. How do they survive? Well by help from sympathetic relatives on his side, mostly Ross Poldark who ever has access to yet another cottage, yet another farm, and enough money to start yet another small business, and their willingness to turn away from the world, really retreat. But they are a side couple, secondary characters, not the chief couple (Ross and Demelza) who do succeed at least enough by the later books: he becomes an MP and she is respected enough though she does find she can't take the abrasive aggressive encounters of London or navigitate its people-shark infested parties and returns to Cornwall for good.

I've done the first Poldark book (Ross Poldark) twice now and shown selections from the first season, Parts 2-4. One of my cleverer students called the attitude of mind of the books "reactive defiance:" I think it's better than that. It's considered holding to an authentic self, but the results are not always fairy tale ... which is part of the reason I like them so much.

Morwenna and Drake's story is probably my favorite one.