A power-outage is just like a snow-storm; quiet friendlinesses: effects of global warming

Last year Northern Virgina had its first earthquake since recording of such things has begun (mid-Virginia often has them) then we had an unusually strong intense hurricane (not as overwhelming as Hurricane Isabelle in 2001 but getting there). Now we are into brutal heat. 95 degrees Fahrenheit at 10:30 pm last night (who looks at the heat index?!).

Well two days ago, this past Friday afternoon to be exact, we had a brief drenching squall, high winds for about half an hour and many in the tri-state region lost power. Even today -- 2012 -- in a vast metropolitan area large parts of this country do not have their power lines underground. People talk of the deprivation of people say in Georgia (ex-Soviet Union); the way electricity has been handled in California and say here is not much different. The corporations supplying it will no spend the money out of the salaries and stocks for those controlling it to make sure power is available to all like water is today.

A side effect of power-outages reminds me of snow-storms. 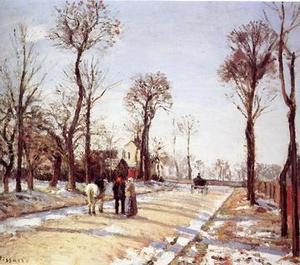 I heard one of my next-door neighbor's voice for the first time. Not only were all my windows opened, but I heard her talking -- aloud! It's not that she's not home most of the time. Liz lost her good paying job some years ago now, and works part-time on some piece basis. Her car is there most of the time. But most of the time she's probably on the Net, on the phone, watching TV.  Well no phone (she has no land-line I assume, only the new "improved electric home phones which don't work when the electricity as out as the landlines used to work), no Net, no TV, nor radio, so she was reduced to talking to a neighbor -- and loud so she could reach her.

Over the course of the day I talked to several of my neighbors -- in one day probably more than I do usually over a month. We exchanged stories, information, how we were coping,and complaints. I talked to the people at Panera's.  Yvette and I went to Panera's at noon yesterday, me to get a coffee and she to look at her email, see how the tennis was going in Wimbledon, to tweet. I tried to get a newspaper and found two machines of Washington Posts had been sold out! Who says the Net is not responsible for the death of paper newspapers?

It's an ill wind that blows nobody any good. The stores were making money. Generators being sold, batteries, grills. I did sit in my car around 9 last night to listen to the news. So radio became essential for those who could reach it.

We cannot cook during power-outages so for supper we went to Olde Towne to a Pizzeria. Very crowded as were all more modestly priced restaurants. Lots of families. Many pregnant women -- nowadays pregnant women don't wear pregnany dresses; they seem to buy regular styled clothes which have more give so the woman's now large stomach protrudes. I suppose this is part of the glorification of motherhood that Elisabeth Badinter shows is newly imprisoning women in a new way.

We did try a walk in Olde Towne Alexandria (the part of the city whose grid still partly resembles the original 18th century town, the center), and there were certainly plenty of people (though not eating on the sidewalks but in the air-conditioned restaurants. Olde Towne's main blocks have their electricity underground so they don't lose power except say during a tornado (which we have more of), vast hurricane (earthquakes?). But it was so hot we did not make it to the Potomac but turned back home. The admiral has suffered a dreadful sinus attack and his throat hurt, his eyes watered, drinking the stuff in his throat most of the day so he'd had enough. So we turned about and walked to our car and then home again home again.

The cats became less social though. They slept during the worst of the afternoon's heat. Cats do sleep 85% of the time I'm told, but yesterday afternoon Ian (our ginger-tabby boy with a pink nose and white paws), little Snuffy, our wary cat), curled up into his grey pod under a table near a corner of the back room where he felt safe. He usually sleeps less deeply.  Clary (our tortoise girl, with greens eyes, flat sweet face, tenacious, bold, very affectionate) just lay out on the floor; she didn't bother with her puff; a kind of posture without a smidgin of guardedness. They drank water.

Republicans tell us there is no global warming. A myth. They use the old formula of uncertainty -- what is certain in this world? -- to beat back the obvious truth. Over in Colorado the state is burning up; Florida is drowning in places just now. They tell us an Affordable Health Care and Patient Protective Act is bad for people! they invent scenarios where it must cost people more money individually who cannot bear it -- when it is they the Republicans who will work hard to set the situation up to make such a situation happen  (if they can, if they elect their mean bully Romney -- see Romney as racist, and how Bains made its money - by helping other companies to re-locate abroad). I realized yesterday what the subtext of Obamacare is. I saw a man with a T-Shirt that said "Godcare:" He trusts in God (not Obama). Over on Inimitable-Boz we are discussing Charles Dickens's Bleak House. At one point a morally stupid mean (in every way character who says of one of the orphans in the book "A child of the Universe," and the older hero, John Jarndyce (played superlatively well in the 1985 film by Denholm Elliot) says the universe is not a caring mother, indifferent altogether. And that's what the story shows in so many of its pathetic instances.

Yes there are ways that don't load the average person with debt or cost: see Mondragon. Orphans are socially made.

Still in an experience there are many sides, and one amusing pleasant one is a power-outage is socially like life after a vast snow-storm, when the world is covered with white, and there are no cars about, here in Virginia much closes down (again the powers that be will not spend any money on it to keep the usual pace and social segregations of life going), people are friendly a bit, stop and talk.

The unexpected side consequences of an aspect of global warming in the social coping of people in Northern Virginia,