How songs and poetry can say something so well ...

What I would have loved to do a few weeks ago when we (the Admiral and I) took our trip to NYC in mid-July to see if we and relatives could put my mother into assisted living was to go to Central Park to the see at least one of the Delacorte productions this summer. As it happened, the theater was dark just that week; it was between time.

We came again this weekend and I found we could not find the time necessary to get tickets to see Into the Woods. Instead as Yvette said, on late Sunday afternoon/early evening (hours after the funeral) we took a wonderfully calming walk in High Line Park. We were in a vexed and tired mood by that time and it lifted our spirits intensely to be in that quiet place where all seems beautiful at a distance: 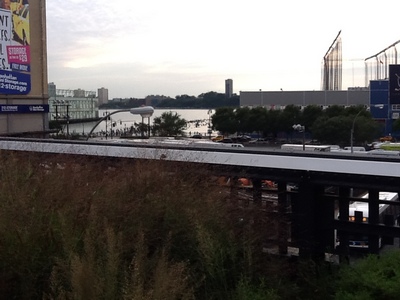 You can see the Hudson River as you walk, also other bridges and the buildings and nooks an crannies of all sorts 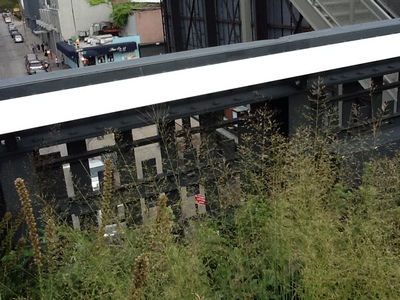 A side view looking down 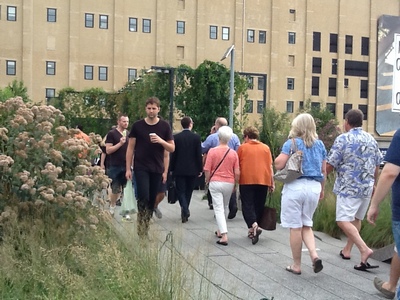 Other people, the walk itself.

As Yvette says, rightly, it's impossible to convey the experience until you have had it. And the Admiral kept pointing out the nuances of all we saw about us; it was not just a walk plumped down, but done effectively intertwined with the old railway (the loungechairs have wheels on the old rails) and city.

and then went out to eat in a downtown "famous chef" restaurant.

But this morning I feel I have made up for this lack of time by reading a review in the New Yorker of Into the Woods where one of Sondheim's songs is quoted. Rapunzel wants to leave her Witch-mother and hide away elsewhere, and the Witch seeks to stop her by cutting her hair. As she clips, she sings:

What did I clearly say?
Children must listen ...
Why could you not obey?
Children should listen.
What have I been to you?
What would you have me be?
Handsome like a prince?
Ah, but I am old.
I am ugly.
I embarrass you ...
Don't you know what's out there in the world? ...
Who out there could love you more than I? ...
Stay with me.
The world is dark and wild.
Stay a child while you can be a child
With me.

The reviewer says "we all leave someone to become outselves" (that's what I was circling round in one of my comments to my first blog). Children leave parents, students leave mentors, lovers leave lovers. And those leave-taking are a kind of wish, too: to become something more than the person we've been ... impermanence and longing are the dominant realities for us all.

So, this morning I wrote a friend, trying again to say what I've been feeling. My friend had commiserated, concluding: "I've moved on, and only occasionally the thought crosses my mind, "Oh, there's nobody else who remembers such-and-such, now that my mother is gone."

I replied I didn't think of it that way: I did not think there is no one around who remembers such-and-such now that my mother is gone. For me I don't think if I brought up any topic she and I would have remembered it in the same spirit -- nor my father for that matter. Probably my mother would deny it ever happened. I missed him for a long time because I could talk to him and he seemed so naturally to understand my feelings at a given moment; I thought he understood me better than any person I'd ever known, could predict or understand my inner reactions, but now I wonder and it's 23 years ago he died. His advice though was always good -- even if I couldn't follow it.  It did take me a long time to stop remembering he was gone and I still miss him in the sense I think his presence might have made some sort of difference, and my children benefited from knowing him -- he would have helped with Caroline and Yvette too. Certainly that night Yvette needed a place to stay there would have been no question. He might have understood Caroline's partner better than me because my father was non-Jewish working class or lower middle in origin.

Her no. I don't feel any personal loss. I feel she lost. She lost her life. She was the big loser. I believe I did say what was true in the blog: she could not accept the choices in front of her -- either the home companon or the new scheme of assisted living which I now see she could well have afforded. Why not I don't know. We had it all ready. We were prepared to help her get into there and be comfortable. She could have played mah jong twice a week for the rest of her days. My aunt was 20 minutes away, Paul (my aunt's second son, in his 50s) a half an hour or so. She could not stand non-Jews and not endure paying Neli (a woman from Georgia, Russia). My aunt (who knew my mother as well as I) also said of what happened with Neli that my mother couldn't bear spending the money and wanted to live with my aunt or me so it would cost her nothing and she could keep accumulating. My mother never told the truth about the way she felt about assisted living (she pretended to be or was delighted when my cousin, Paul, took her), but it too would have cost a lot, and she did keep on with these fantasies that when she ran out she'd be on the street. My cousin, Mark (my aunt's oldest son), said this is the dread of so many old people in the US.  But she appeared to need care 24/7 and whatever it may be said that "she loved" me or my aunt it was certainly not an emotion which would make her behave rationally or sufficiently considerately to others to enable them to cope with her presence. Anyway I had no separate room for her nor did my aunt & my uncle could not have endured the continual intrusion (he's ill).

Sondheim: yes, we leave because we need to become ourselves, and the song and situation is about the best poem I've seen about the parental point of view (which I now share too) I can remember reading.